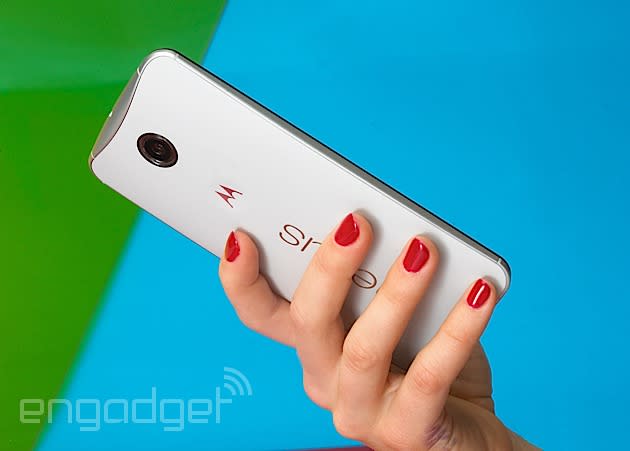 If you're an AT&T customer eager to get your hands on the over-sized Nexus 6, get ready to wait a bit. AT&T stores are apparently returning the first crop of Nexus 6 units to Motorola over a software bug, Droid Life reports. And it'll likely be a while until their stock is replenished. The bug reportedly kills network connectivity on affected phones after displaying a black screen. We haven't seen too many complaints about the issue yet, but they've only started shipping out to preorder customers a few days ago. In any case, be prepared to hop it back to an AT&T store if the bug hits you. While the recall doesn't inspire much confidence, it could be worse. Just imagine if Motorola had to issue a widespread recall after thousands of people had their phones for weeks. For now, would-be Nexus 6 owners an AT&T can keep a giant candy bar or block of cheese nearby to train their hands for the phone's massive proportions.

Motorola offered up the following statement about the recall to Android Police:

We delivered a small number of Nexus 6 smartphones with incorrect software to AT&T customers who pre-ordered. The incorrect software prevents the phone from starting up properly. We will provide replacements for consumers whose phones are affected. The problem has been corrected and the phones currently shipping are fine.

In this article: ATT, Nexus 6, recalls
All products recommended by Engadget are selected by our editorial team, independent of our parent company. Some of our stories include affiliate links. If you buy something through one of these links, we may earn an affiliate commission.