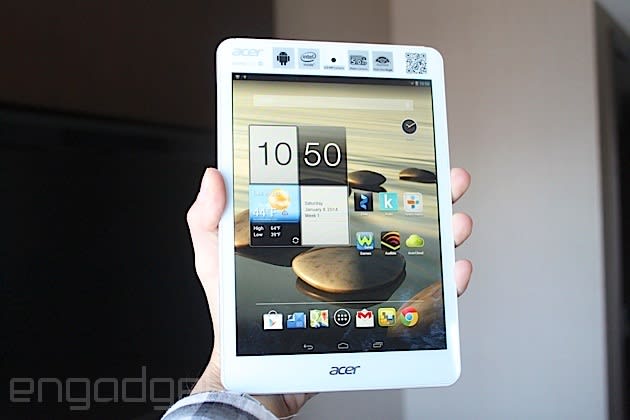 Acer's been quick to make its immediate plans for the new year known, including the impending release of its refreshed Iconia Android tablets. Today the company's been kind enough to show the new slates to us, both of which will ship with 4.2 Jelly Bean. The A1-830 is the more premium of the pair, and to give you a quick reminder of the specs, it sports a 1.6GHz dual-core Intel Atom processor, 1GB of RAM, 16GB of internal storage (don't worry, there's a microSD slot if you need more), and 5-/2-megapixel cameras. With its 4:3 aspect ratio and 1,024 x 768 display, you'd be forgiven for mistaking it for a iPad mini from afar -- the form factor is deceptively similar. It sits at the top of Acer's tablet range, and fittingly, has an aluminum back to prove it. It doesn't look half bad, either, although the plastic which encroaches the top edge, framing the camera, kind of ruins the upper-end look. The screen appears to be relatively good quality and it feels solidly built. With a noticeably thin profile, it gives a good first impression. Its specs might be of a mediocre standard, but the price makes up for it. When the tablet hits the North American market in late Q1 2014, it'll set you back $149, which we wouldn't say is an unfair ask after out brief flirtation with the hardware.

Acer's refreshed Iconia B1 tablet (aka the B1-720), which falls in behind the A1, didn't score nearly as high in our estimation, however. There's a lot of bezel surrounding its 7-inch, 1,024 x 600 display, making the screen look smaller than it really is. Spec-wise, it's not all that different from the A1. You're looking at a 1.3GHz dual-core Mediatek CPU, 1GB of RAM, 16GB of storage (microSD-expandable), and only a 0.3 megapixel front-facing camera. It's significantly thicker than the A1 and swaps the aluminum backing for textured plastic. You can squeeze a fair few creaks out of it; in general, it feels leagues behind the build quality of the A1. The screen, too, is of noticeably lower quality, but then again, it'll only be $130 when launched in black and red hues later this month. If you want 3G connectivity on top of WiFi, a SIM-friendly model (B1-721) will be available soon after, but it'll arrive for at least a $50 mark-up. 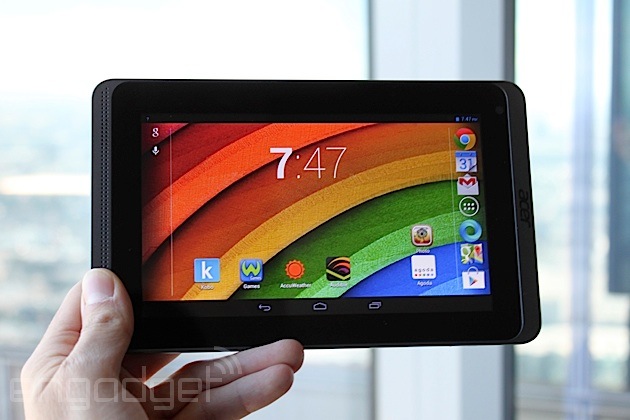 Acer made a last-minute pricing adjustment to the A1, bringing the cost down from $180 to $149. While that's great for enticing eyes to the A1, it has a completely different impact on the B1. Given there's been no price adjustment for the lower-end slate, we'd highly recommend chucking the extra 20 bones down for the altogether better tablet.

In this article: acer, acericoniaa1-830, acericoniab1-720, android, ces, ces2014, hands-on, IconiaA1-830, IconiaB1-720, tablet, tablets
All products recommended by Engadget are selected by our editorial team, independent of our parent company. Some of our stories include affiliate links. If you buy something through one of these links, we may earn an affiliate commission.