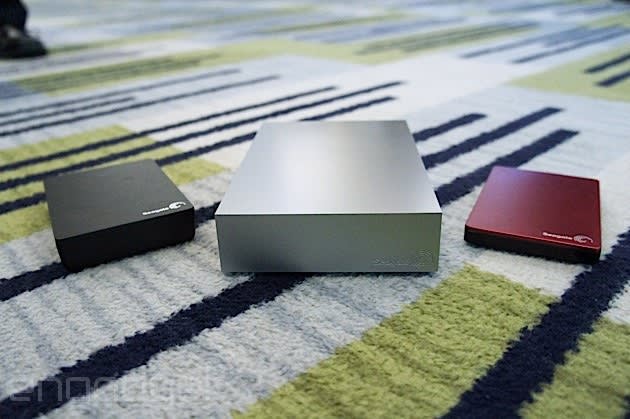 We've been familiar with Seagate's Backup Plus line for quite some time now, and the company has just announced three new offerings under that moniker here at CES. The storage outfit has pulled the wraps off of Backup Plus Slim, Fast and desktop external hard drives, living up to each of those names with both automatic and scheduled backups. First, Fast is being touted as the first 4TB portable drive with dual 2TB drives in RAID 0. The unit is bus-powered at the hands of its USB 3.0 connection and claims speeds of 220 MB/s with a metal-topped plastic enclosure. It's set to ship for $300. Join us on the other side of the break for details on the rest of the group.

Next, the Backup Plus Slim has been labeled by Seagate as the slimmest (12.1mm, to be exact) portable drive on the market with 500GB, 1TB and 2TB capacities. This option is also powered by USB 3.0 transfers and sports the same plastic shell with a solid aluminum top. If color coordination is your thing, black, silver, red and blue paint schemes can be yours for the taking at prices ranging from $100 to $180. Last but not least, for those that don't mind keeping their storage repositories at a workstation, the Backup Plus desktop serves up 2TB, 3TB and 4TB capacities inside a metal housing. This option is larger than the other two, as its meant to be left at home rather than stuffed in a jacket pocket. Pricing for the trio has been set at $130, $160 and $230, respectively, and the entire new Backup Plus line ships next month.

In addition to the new hardware, Seagate has also updated its Dashboard app that's used with all of its Backup drives. The software still acts as a PC backup and allows for social sharing, but this time around, mobile-device backup has been added. Apps for taking advantage of the update will be available for both iOS and Android, however the Apple-flavored version will only back up the Camera Roll. The option for Google's OS protects pictures, videos, contacts, messages and your call log in case of a gadget failure. For a closer look at the whole lot, visit the gallery above for a quick gander.

In this article: backupplusdesk, backupplusfast, backupplusslim, ces2014, externalharddrive, hands-on, harddrive, seagate, storage
All products recommended by Engadget are selected by our editorial team, independent of our parent company. Some of our stories include affiliate links. If you buy something through one of these links, we may earn an affiliate commission.