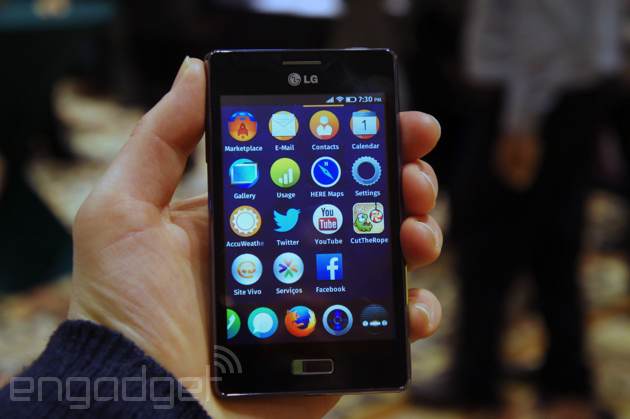 LG's first-ever Firefox OS handset has already been making the rounds in Brazil, where's it been since October. And while we haven't heard much about US availability on the Fireweb (no real surprise there), the handset did show up here at CES, alongside a smattering of other already-announced phones running the mobile operating system. We played around with the handset a bit and weren't particularly taken with what it was offering up hardware-wise (again, no giant surprise) -- the company isn't exactly offering up its A-List devices for the browser company's nascent OS.

The shiny back has a decidedly plastic feel (though it certainly brings it in the gloss department). The four-inch display is a pretty uninspired 480 x 320 and while the 1GHz processor isn't worth writing home about, it does a decent enough job running those HTML5-based apps. At top, you'll find the power button and headphone jack, with the volume rocker on the left-side and microUSB jack on the bottom. As mentioned above, you can pick the phone up now, so long as you live in Brazil, and thankfully, the $207 asking price won't cost you an arm and a lef.

6
In this article: ces2014, firefoxos, Fireweb, lg, mobilepostcross, phone, smartphone
All products recommended by Engadget are selected by our editorial team, independent of our parent company. Some of our stories include affiliate links. If you buy something through one of these links, we may earn an affiliate commission.