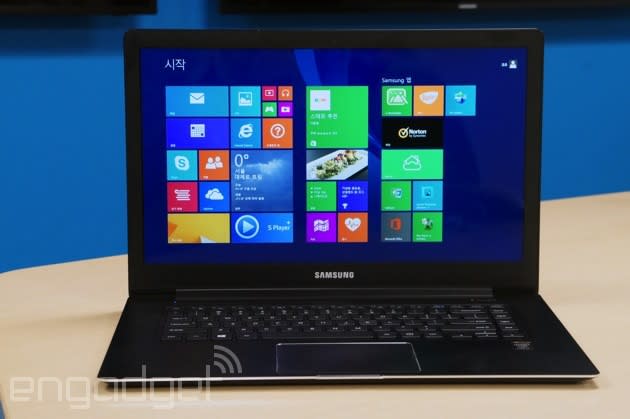 In addition to refreshing the specs, though, Samsung also made some design changes that hint at what the 13-inch model might look like when it eventually receives another update. For starters, it has an aluminum chassis, rather than a magnesium one, and is devoid of all the garish logos we complained about on the ATIV Book 9 Plus. Samsung also retooled the keyboard, adding subtly contoured keycaps with a tactile, rubbery finish and a quieter sound. In our brief hands-on, we were indeed impressed with the feel of the keys, and the backlighting also seems brighter than it used to be. That said, it's still a flat keyboard; there's only so much travel you can get on a machine this thin.

There's one more change you won't see, but you'll definitely hear: Samsung added lossless audio support so that if you're listening to music using headphones or a compatible speaker, you'll enjoy richer, clearer sound with shockingly little distortion. (You won't get lossless quality on the notebook's built-in speakers, though Samsung said it made some improvements there too.) Though this might seem like an obscure spec, given how relatively few of us are audiophiles, a Samsung rep told us that as more streaming services start supporting lossless, it wants to be ready with laptops that can handle it.

Finally, Samsung also refreshed its ATIV One 7 all-in-one, moving from a 23-inch screen to a 24-inch one. Other key specs include 1TB of storage, a Core i5 Haswell processor, dual 7-watt speakers, a tweeter, HDMI in/out ports and the ability to stream music over Bluetooth even when the system is powered down. No word on how much it'll cost, but Samsung says it will reach the US sometime in the first half of this year. For now, stay tuned for some hands-on pics -- and enjoy the photos we already took of the new ATIV Book 9.

In this article: AtivBook9, ativbook92014edition, ativone7, ces, ces2014, hands-on, samsung, SamsungAtivBook9, samsungativone7
All products recommended by Engadget are selected by our editorial team, independent of our parent company. Some of our stories include affiliate links. If you buy something through one of these links, we may earn an affiliate commission.