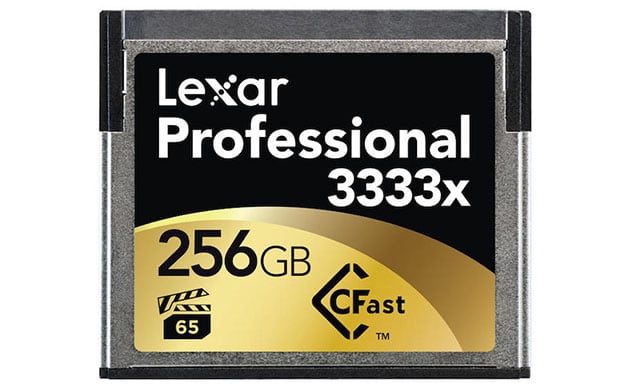 Lexar has just announced new CompactFlash cards using the CFast 2.0 SATA tech format to greatly improve speeds and maybe steal back some thunder from SDHC. The cards, ranging in size from 32GB to 256GB, support a mind-boggling max read speed of 500 MB/s, bettering earlier models from SanDisk. That's easily enough to keep up with even RAW 4K images, let alone the 65 MB/s barrier required for the VPG-65 performance guarantee standard. Don't get too excited yet, though. First off, so far the company has only released engineering samples to help camera manufacturers. Secondly, there aren't actually any cameras that support CFast 2.0, and the format isn't backwards-compatible whatsoever with current CompactFlash tech. Still, combined with Lexar's Professional Workflow CFast 2.0 USB 3.0 reader -- also just announced -- you'll be able to get superfast speeds on your desktop when it starts shipping sometime in Q1 2014. And when it does get supported by the likes of Arri's Amira and other new cameras, it'll be nice to know you won't need to cram an SSD into your camera to capture 4K.

In this article: 3333x, 500MBps, CF, CFast, CFast2.0, CompactFlash, Lexar, USB3.0
All products recommended by Engadget are selected by our editorial team, independent of our parent company. Some of our stories include affiliate links. If you buy something through one of these links, we may earn an affiliate commission.