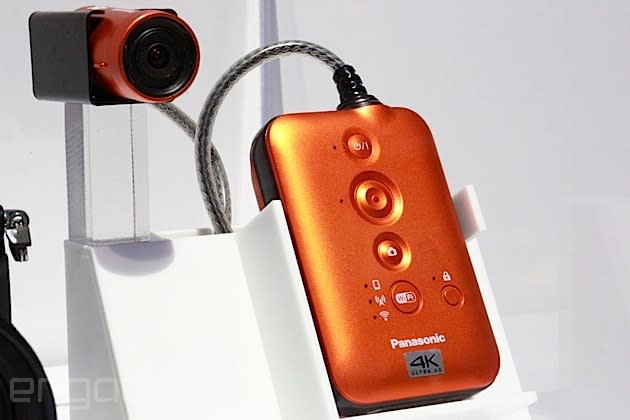 Wearable devices and 4K are two of the biggest trends at CES, and Panasonic has managed to make both collide. The outfit's revealed a UHD camera that folks can wear on their head with the help of a plastic mount that wraps around their ears and neck. While the prototype is nearly identical to the HX-A100 cam the firm debuted at last year's show (yes, it's still waterproof), this Ultra High-Definition model is lined with some more powerful innards. Detailed tech specs are being kept under lock and key, but the unit on display was sending a live feed of the pixel-packed footage to a 4K display through a mini-HDMI port -- a feature that will be available in the final version. Despite the hardware's compact form, it produced sharp video free of stuttering, and caught a fairly wide field of view courtesy of its fisheye lens. While there's no word on pricing, the first-person camera is slated for a release later this year.

5
In this article: 4K, camera, ces, ces2014, eyes-on, hands-on, Panasonic, wearable, WearableCamera
All products recommended by Engadget are selected by our editorial team, independent of our parent company. Some of our stories include affiliate links. If you buy something through one of these links, we may earn an affiliate commission.