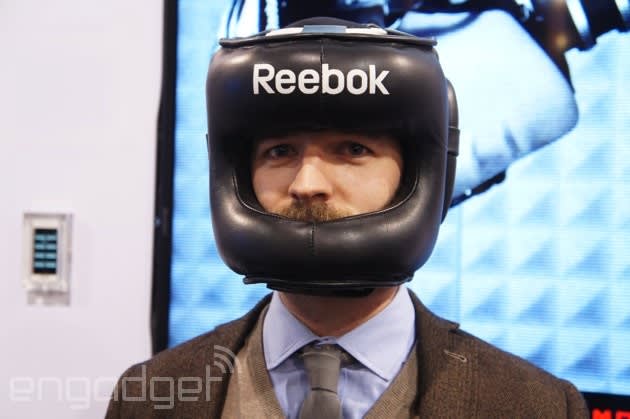 Last year Reebok showed up to CES with the Checklight, a head-impact sensor developed in collaboration with mc10. Problem was, the company didn't really have a way to demo the preproduction version of its G-force sensor. They simply slipped it into a black skullcap and let the press take photos. But, in the interim, it's come to market, offering protection to athletes young and old, for a reasonably affordable $149. This year, the companies came fully prepared with a pair of boxing gloves and some headgear. Naturally, being the masochist I am, I invited anyone who was interested to join me at the Reebok booth on the show floor where they would get to punch me in the face. The response was alarmingly enthusiastic.

Not wanting to disappoint, I dutifully donned the black skullcap, with the sensor's blinking display hanging behind my head. Then it was just a matter of removing the glasses, putting on the foam headgear and accepting that I'd brought this on myself. To the Checklight's testament, it appears to work quite well. After taking a surprisingly strong blow from one of the many editors lined up to take a swing, the rotational and directional sensors inside triggered an alert that perhaps my coworker had gotten a little too enthusiastic. The light at the back flashed yellow to indicate that I absorbed a moderate impact. After assuring everyone that I was ok, we continued with the demonstration. But, had the light flashed red, the hands-on (fists-on?) would have been quickly called to a close. While red doesn't mean you have a concussion, it does indicate that you've taken a particularly hard hit and should get checked out. For more of this Engadget editor getting punched in the head, check out the video after the break.

In this article: boxing, ces2014, checklight, gear, hands-on, mc10, reebok, sports, video
All products recommended by Engadget are selected by our editorial team, independent of our parent company. Some of our stories include affiliate links. If you buy something through one of these links, we may earn an affiliate commission.