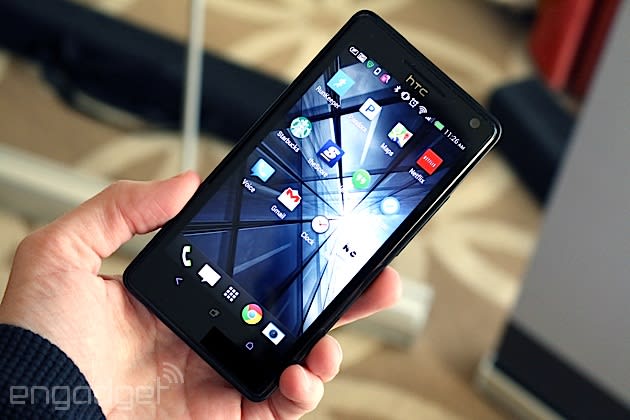 Shortly before a flagship smartphone is announced to the general public, companies like HTC will often send a prototype version of the upcoming product to tight-knit partners and developers. We got an exclusive close look at one such prototype of the M7 -- the codename for the HTC One -- which as you can see in the above image and gallery below, looks very little like the final version. That doesn't mean the plastic casing shouldn't look oddly familiar to you; this particular device was leaked in the latter half of last January. But this goes to show the importance companies like HTC place on secrecy -- the more hands that are in the pot, the more likely it is that leaks will pop up. In this way, HTC was very successful at keeping the final product away from prying eyes (well, aside from a few accurate renders, that is).

Upon taking a look at the once-top-secret device, we noticed a couple things that especially stood out to us. First, we peered into a completely empty void where a camera should have been; despite the fact that the chassis left a spot open for the rear camera module, none was to be found. If we were to guess, we imagine the UltraPixel setup simply wasn't ready by the time this prototype was made, so the company shipped it without one. Additionally, just as the leaked images show, there are three icons for capacitive buttons, even though there are only two on the final version. The prototype threw in an icon for recent apps, but interestingly enough, it's not a functional button whatsoever. Perhaps HTC had been toying with the idea of keeping a three-button setup instead of the two-button layout it finally settled on.

We've included a small gallery of images below so you can take a closer look at the phone that many originally thought would become the HTC One. Frankly, we're pretty happy about which version HTC eventually used, but it's still fun to take a look behind the scenes. And think about this: it's quite possible that right now -- at this very moment -- those same partners are playing with the next HTC flagship's prototype in much the same way as they did with this one.

25
In this article: HTC, HTC ONE
All products recommended by Engadget are selected by our editorial team, independent of our parent company. Some of our stories include affiliate links. If you buy something through one of these links, we may earn an affiliate commission.