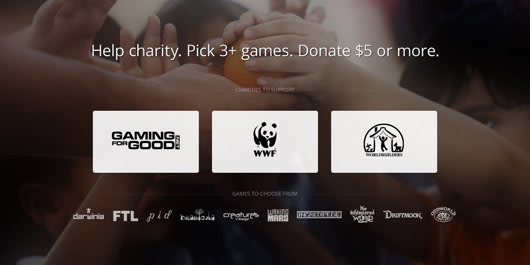 Digital distributor Good Old Games announced that it raised $1.9 million for the World Wildlife Fund, Worldbuilders, and Gaming for Good during last year's Charity Promo, an event that offered a lineup of standout indie games in return for charitable donations.

Ten studios took part in the promotion, waiving their cut of royalties for games sold during the fundraiser. During the course of the event, buyers received digital copies of three featured games after donating $5 or more to one of GOG's three chosen charities.

DRM-free Digital Distributor's first ever Charity Promo with WWF, Worldbuilders, and Gaming for Good got the job done for people in need all over the world.

The leading DRM-free digital distributor of the best games in history for PC and Mac brought together gamers who raised $1.9 million during its first ever online charity event carried out in November 2013. After celebrating five successful years in business, and building a robust hardcore gaming community, GOG.com decided it finally had the means to give back--and it gave back in spades. During the Charity Promo event gamers were able to pick 3 or more games and donate $5 or more to one of three charities: WWF, Worldbuilders, and Gaming for Good.

With games like FTL: Faster Than Light, The Whispered World, and Waking Mars as part of the action, the gamers were more than happy to go on a spending spree. The developers of the games available in the Charity Promo - Introversion, Subset Games, Tiger Style Games, Amanita Design, Instant Kingdom, Northway Games, Digital Game Factory, Might & Delight, Daedalic, and Oddworld, were all supporting the charities as well, as they were not receiving any royalties for the games that were being sold as part of the fundraiser. The combination of these selfless developers and GOG.com's great gaming community--and the fact that they were willing to support these great causes--were the real cause of the success of the fundraiser, and continue to show that gamers around the world love to help make the world a better place.

With a successful 2013 in the books, plenty of exciting upcoming releases, and more big announcements, 2014 promises to be a landmark year for gamers on GOG.com. And they won't forget about giving back either.

GOG.com is a store that sells DRM-free games for download. With more than 650 games in its catalog and 150+ partners, they have games from every big studio you've ever heard of-Electronic Arts, Activision, Ubisoft, Square-Enix-and games from indie studios that produce brilliant games in obscurity. Formerly known as Good Old Games, GOG.com has games from as far back as 1981 and as recently as yesterday. With the best games in history for PC and Mac, GOG.com has grown to be the #2 independent digital distributor on the 'Net.
In this article: charity, drm-free, fundraiser, gog.com, good-old-games, mac
All products recommended by Engadget are selected by our editorial team, independent of our parent company. Some of our stories include affiliate links. If you buy something through one of these links, we may earn an affiliate commission.