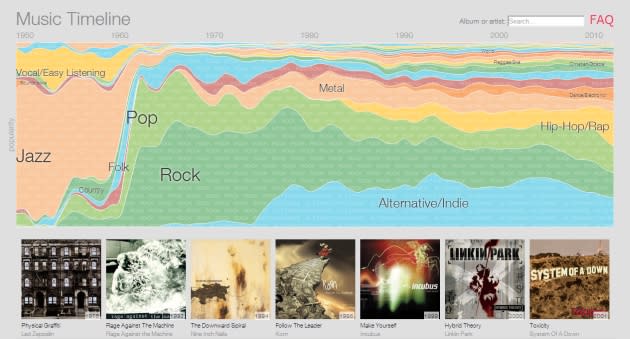 It's no surprise that Google has been tracking music uploads, but what's unexpected is exactly what the search giant is doing with all of that info. Interactive maps of music's ongoing journey are charted through Play Music's users' libraries, found over on Google's Research Blog. You could, for example, trace the ebb and flow of a genre era by era (rock remains one of the biggies while electronica's presence is relatively new), or even identify which release from a band is the most prominent. Looking at the Deftones, their biggest album is 2000's White Pony, and they're near the top of the alt-metal heap overall. Music nerds could lose a few days poring over the various ins and outs of the soundtrack to their lives, so be careful who you share this with. Perhaps best of all, Google says this likely won't be the last collaboration we see between the research and music teams.

In this article: bigdata, google, GooglePlayMusic, GoogleResearch, googleresearchblog, graphs, music, StreamingMusic
All products recommended by Engadget are selected by our editorial team, independent of our parent company. Some of our stories include affiliate links. If you buy something through one of these links, we may earn an affiliate commission.