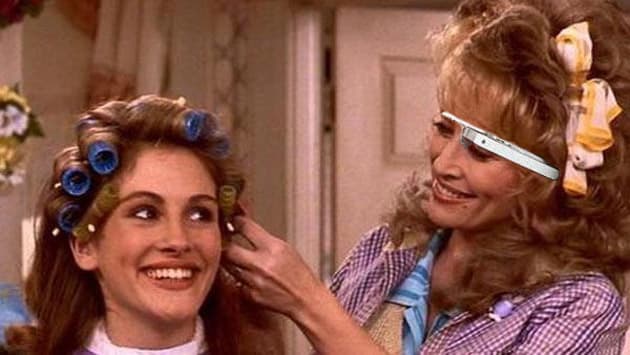 At least according to L'Oreal. The hair care giant (and purveyor of giant hair) just announced Matrix Class for Glass, which gives clients and beauty school students a stylists-eye view of your head. The three-part program includes a video series of in-depth beauty tutorials shot with Google's wearable; Matrix Eye for Style, an "exclusive" salon experience provided by George Papanikolas, who will record sessions with the headset; and a series of lessons for beauty professionals given by be-Glassed hair care superstars.

This isn't the first or last time L'Oreal has taken advantage of the wearable; it used Glass to document Mercedes Benz Fashion Week in Madrid late last year and has plans to release a Glass app sometime in 2014. It might seem like an odd coupling considering most glass holes are more Super Cuts than Vidal Sassoon, but L'Oreal says there's an intersection between the early adopters of fashion and tech. According to a study done by its partner at Fashion Week, Nurun, "The futuristic nature of Google Glass appealed to the fashion-forward, tech-savvy audience..." When we start seeing years-old issues of Wired replacing copies of Southern Hair at Truvy's, we'll believe it.

In this article: beauty, beauty school, education, google, google glass, hair, loreal, matrix class for glass, steel magnolias, tutorials, wearables
All products recommended by Engadget are selected by our editorial team, independent of our parent company. Some of our stories include affiliate links. If you buy something through one of these links, we may earn an affiliate commission.