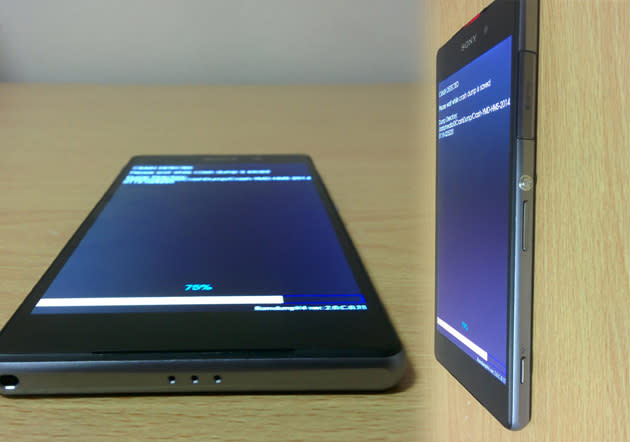 Sony is doing a pretty job keeping itself in our line of sight right now. Not only did it out two (or almost two) new handsets at CES (the Z1 Compact, and a T-mo only Z1S), it also released a brace of mid-rangers a few days later. Today is all about the mystery handset you see in the picture above. A user on XDA claims the handset shows the model number Xperia D6503, and is potentially another Z1 variant. All we know from the image is that the mic grille is now three holes (not a mesh), and the lanyard hole is in a different location. Judging by the crash report on screen, there's some unstable software running, so if it's not a prototype Z1, then it's still almost certainly a pre-production model. XDA user iRimas claims the device has the familiar metal body, but that the thinner bezel houses a screen nearer to 5.2-inches. So, MWC is just around the corner, and Sony likely doesn't want to turn up without something new to show, but whether it's a Z1 "L"-type deal or the fabled/logical Z2/Sirius (or just a prototype) remains to be seen.

In this article: mobilepostcross, sony
All products recommended by Engadget are selected by our editorial team, independent of our parent company. Some of our stories include affiliate links. If you buy something through one of these links, we may earn an affiliate commission.