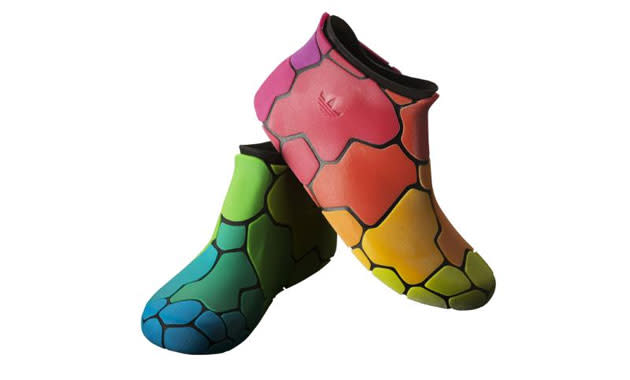 Stratasys' has a new $330,000 3D printer, but this one has the potential to do a whole lot more than monochrome figurines. In fact, the company says it's the first machine able to create objects in colored, flexible materials. The Objet500 Connex3 3D printer uses rubber and plastic as base materials, although according to Stratasys (the company which now owns the MakerBot series) material combinations will be able to offer different levels of rigidity, transparency and opacity. Colors, meanwhile, are produced by the same mix of cyan, magenta and yellow you'll find on your inkjet printer at home -- it even comes with six palettes of rubbery "tango" colors, if you're perhaps looking to channel your '90s tastes into some tasteful flexible booties, as seen above.

At the technical level, the printer can go as fine as 16-micron layers, offering a high level of detail and finish, and can pump out around 30kg of resin (that is, base material) per run. Talking to the BBC, a Stratasys spokesperson said the advanced printer could cut down industrial design prototyping times by 50 percent, although he was talking about the time from prototype to market, not printing time itself. The Objet500 Connex3 launches today, although those flexible color printing materials won't be available to buy until Q2 later this year, so hold on to those neo-boot dreams for now.

In this article: 3dprinter, 3dprinting, color, flexible, stratasys
All products recommended by Engadget are selected by our editorial team, independent of our parent company. Some of our stories include affiliate links. If you buy something through one of these links, we may earn an affiliate commission.