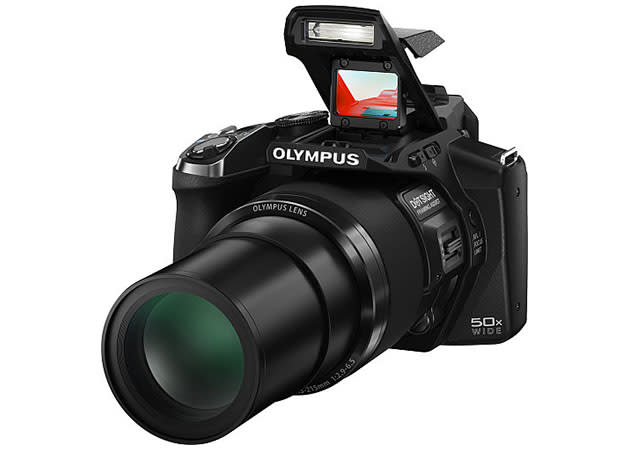 Not only has Olympus unveiled the Stylus SP-100 with a whopping 50x optical zoom lens, it's also tackled one of the biggest issues in using such cameras: losing a moving subject. The new model is equipped with what the company calls its "eagle-eye" dot-sight located just above the viewfinder, which projects a target onto a semi-transparent mirror below the flash, as shown in the photo after the break. That way, you can keep a bead on your photographic prey (the tech is also used on gun-sights) without needing to zoom out, which could make the difference between nailing or losing a shot. The rest of the specs include a 1/2.3-inch 16-megapixel CMOS sensor with a TruePic VII processor, 7 fps burst speed with a small six-frame buffer, a 24-1,200 (35mm equivalent) f/2.9-6.5 lens, a 3-inch (460K-dot) LCD, 920K-dot EVF and 1080/60p Full HD video. It'll arrive in March for $400 or so and while it might not be the biggest superzoom out there, at least you may actually catch Junior's winning goal. In this article: 2400mm, 50x, dot-sight, Olympus, SP-100, superzoom
All products recommended by Engadget are selected by our editorial team, independent of our parent company. Some of our stories include affiliate links. If you buy something through one of these links, we may earn an affiliate commission.