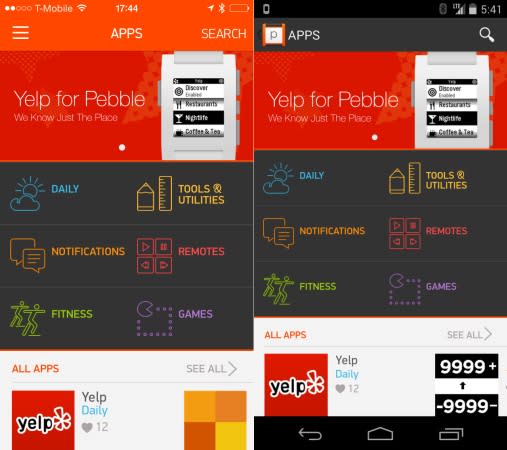 Pebble shipped its new all-metal "Steel" smartwatch earlier this week, and now reveals that app store updates for its iOS companion software will roll out on Monday (the Android version is about to launch in beta and will follow soon after). Until now, wearers have had to hunt through a myriad of app developers and third-party sites to download new watchfaces or apps. Once the apps (and older Pebble devices) get updated and paired wirelessly over Bluetooth, you'll only need a Pebble account and two clicks to load new software from a phone or tablet. Since the watch itself can only have up to eight apps loaded at any given time, easily managing the thousands of choices available is an important new feature. We took a long look at the store and its apps (including software from ESPN, GoPro and Foursquare) in our review of the Pebble Steel, owners should keep an eye on their mobile devices Monday for access.

Putting finishing touches on the Pebble appstore over the weekend-check us out on Monday! Looking good so far :) pic.twitter.com/GViqLwyQsV

Exciting news... The @Pebble appstore is ready! We'll start rolling out the update on Monday. pic.twitter.com/jhunudRb7v

In this article: android, apple, apps, appstore, ios, mobilepostcross, pebble, Pebble smartwatch, Pebble Steel, smartwatch, update
All products recommended by Engadget are selected by our editorial team, independent of our parent company. Some of our stories include affiliate links. If you buy something through one of these links, we may earn an affiliate commission.