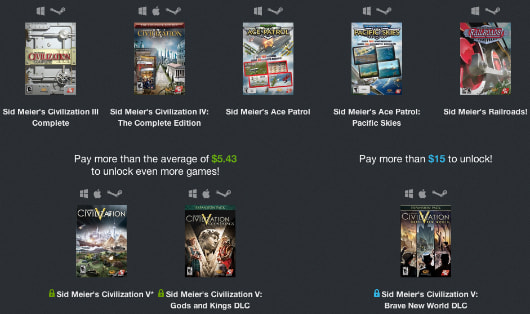 Humble Bundle offers three tiers of entry into Sid Meier's epic, world-building simulation games: The first package offers Civilization 3 Complete, Civilization 4: The Complete Edition, Ace Patrol, Ace Patrol: Pacific Skies and Railroads for any price you want. The second tier adds Civilization 5 and its Gods and Kings DLC if you pay more than the average, and the third tier packs in Civ 5's Brave New World DLC for $15 or more.

The Humble Sid Meier Bundle is live for two weeks and benefits the charity Action Against Hunger, a humanitarian organization with the goal of ending world hunger. As always, spend more than $1 to get Steam keys with your Humble Sid Meier Bundle order, and split whatever you pay among Humble, the developer and the charity.
Source: Humble Bundle
In this article: ace-patrol, Civilization-3, Civilization-4, Civilization-5, humble-bundle, mac, pc, Railroads, Sid-Meier
All products recommended by Engadget are selected by our editorial team, independent of our parent company. Some of our stories include affiliate links. If you buy something through one of these links, we may earn an affiliate commission.