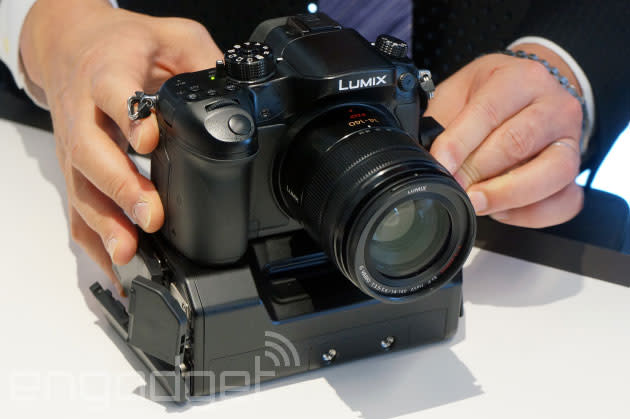 Long gone are the days when digital cameras were just for still photographers. In fact, with its GH4, it's easy to argue that Panasonic is putting an even greater emphasis on video capture -- of the 4K variety, in this case. The Lumix GH4, teased as the "next GH" just last month at CES, offers tremendous advantages over its predecessor, the GH3. Perhaps most notable are the camera's 4K capabilities. This year's model can shoot both 3,840 x 2,160 and a 4,096 x 2,160 "cinema 4K" format at 30 frames per second with a 100 Mbps bit rate. If you're willing to settle for 1080p (at 60, 30 or 24 fps), Panasonic's also added a 200 Mbps option, with 100 and 50 Mbps offerings available, too. You can capture clean HDMI video with an external recorder at 4:2:2 8/10-bit output, while a (relatively gigantic) interface unit mounts on the bottom and adds four SDI outputs with support for 4K (4:2:2/10-bit), time code, two XLR microphone inputs and a 13.8-volt Canon terminal for external power. That accessory also includes phantom power controls and LED audio level readouts.

There are significant improvements on the stills front, too. There's a new 16-megapixel CMOS Micro Four Thirds sensor, which should benefit video captures as well. The camera supports a sensitivity range of ISO 200-25,600 (compared to a 12,800 max with the GH3), while the viewfinder has been boosted with a very sharp 2.36M-dot OLED panel and the 3-inch main tilt-and-swivel display now has a higher-res 1.04M-dot OLED screen. Panasonic is also emphasizing performance improvements, including a new 0.07-second focus speed, 12 fps burst mode or 7 fps with AF tracking and a shutter rated for 200,000 total clicks. The body is still constructed of magnesium alloy, and it's splash- and dust-proof. Expect to snap more than 500 stills with a full charge. There's also SDXC UHS Class 3 compatibility -- you'll need a latest-gen card to capture 200 Mbps video internally.

What we don't have at this point is pricing or a ship date. At CES, Panasonic quoted a price below $2,000, and considering the improvements over the GH3, which currently retails for about $1,000 (and will remain on the market), we wouldn't be surprised to see a final MSRP near the $2k mark. Reps promised more information on the availability front next month, and while the info rollout has been anything but speedy, we're inclined to think the GH4 will be worth the wait. 24
In this article: 4k, camera, cameras, cpplus, cpplus2014, gh4, hands-on, lumix, MicroFourThirds, panasonic, Panasonic GH4
All products recommended by Engadget are selected by our editorial team, independent of our parent company. Some of our stories include affiliate links. If you buy something through one of these links, we may earn an affiliate commission.