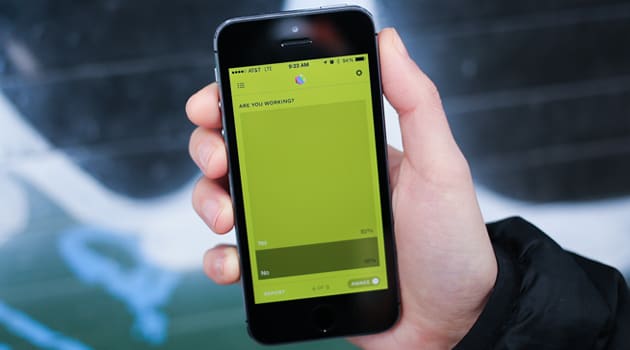 Nicolas Felton is something of a data nut. (Hopefully he won't take umbrage with that characterization.) The man has been reporting various metrics of his personal life since 2005 in the annual Feltron Report. Eventually he created Daytum so that others could join in his obsessive tracking, but while the web and iOS apps were slick, they could be quite daunting for the uninitiated. A person needed to make a habit of tracking their habits -- counting how many cigarettes they smoke, how often they make it to the gym, etc... So, after a stint at Facebook, the world's premier self quantifier went back to the drawing board with a few friends and came up with Reporter.

The new app is iOS only, sadly, but does offer a much lower barrier to entry while maintaining the nearly infinite level of customization that Daytum did. Instead of aiming for completeness, Reporter asks you at random times to track specific things with "lightweight surveys." This allows the app to still monitor broad trends in your lifestyle, without worrying about ruining your data by forgetting to log each cup of coffee you drink. Felton says that through randomized push reminders that "sample your life," you can still learn a lot without becoming a slave to meticulously monitoring your every act. Reporter still requires plenty of manual tracking, but the creator argues it's the best way to answer the most interesting questions. There is some help provided through data harvested from Foursquare and your contacts for autocompletion, and it can also tap into the power of the M7 processor for tracking your steps.

While there are no concrete plans at the moment, Felton left open the possibility of expanding the number of sources that Reporter can pull data from. For instance heart rate or sleep-tracking information from a wearable, or the media you consume on your Apple TV. Reporter is available now in the iTunes App Store for $3.99.

12
Source: Reporter
In this article: daytum, ios, mobilepostcross, NicholasFelton, reporter, selfquantification, tracking
All products recommended by Engadget are selected by our editorial team, independent of our parent company. Some of our stories include affiliate links. If you buy something through one of these links, we may earn an affiliate commission.