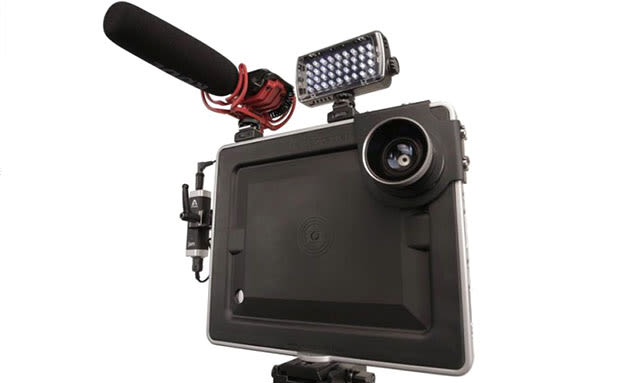 The larger iPad's high-res screen is a plus for shooting video, but wielding it can make one look like, dare we say, a dork. One way to overcome that stigma is by shooting with the original Padcaster (pictured above), a metal frame that lets you mount your tablet on a tripod and attach lenses and other accessories. The company has now launched a version for the iPad mini on Kickstarter, which you may prefer for its less bulky size, but equally capable 1080p camera and (optional) Retina screen. Like the last model, the Padcaster Mini consists of a frame with threaded holes for video accessories, a bracket for 72mm and 58mm lens adapters and a DSLR attachment if better video is needed. That'll let journalists and bloggers broadcast live straight from an iPad, or even use it as a makeshift teleprompter or support to watch TV in bed, for instance. It's now about halfway to its goal, so if you're looking to cast in style from your own mini, you can pledge at the source starting at $99.

Source: Kickstarter
In this article: CameraRig, iPadMini, Kickstarter, Padcaster, PadcasterMini
All products recommended by Engadget are selected by our editorial team, independent of our parent company. Some of our stories include affiliate links. If you buy something through one of these links, we may earn an affiliate commission.