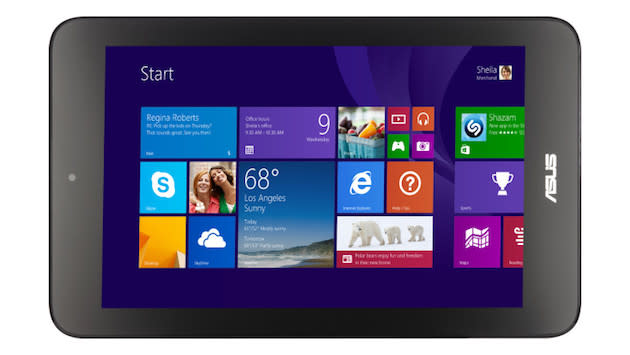 ASUS, like many other companies, took to CES 2014 to introduce a number of new products. Among these was the often-leaked VivoTab Note 8, an 8-inch Windows 8.1 tablet with support for Wacom pen input. If you were remotely intrigued back then, it looks as if Microsoft has now (quietly) placed it up for grabs in the US. Currently, Redmond's online store is selling the 32GB model of ASUS' VivoTab Note 8 for $329, which is slightly different than the $299 price tag it was announced with in Las Vegas. Strangely enough, there's also no apparent sight of the 64GB flavor, which makes us think that this Bay Trail-powered, pen-friendly slate may have been listed ahead of time. Regardless, it's very much available here -- at least for the time being.

In this article: ASUS, ASUS ViVoTab Note 8, M80T, Microsoft, Note 8, Note8, VivoTab Note 8, VivoTabNote8, Wacom, Windows 8.1, Windows8, Windows8.1
All products recommended by Engadget are selected by our editorial team, independent of our parent company. Some of our stories include affiliate links. If you buy something through one of these links, we may earn an affiliate commission.