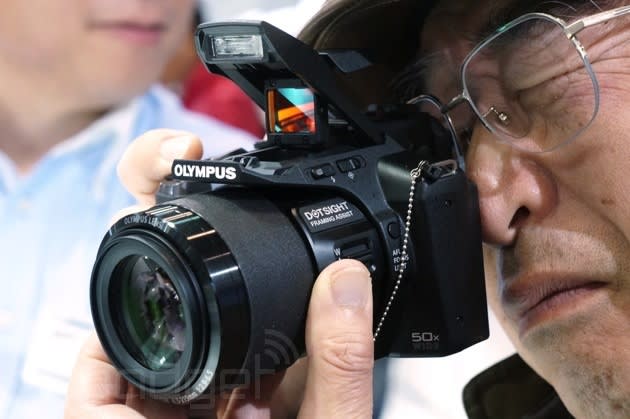 There are bigger superzooms out there, but Olympus' new Stylus SP-100 is trying to make you a better long-distance shooter alongside its 50x zoom functionality. A see-thru viewfinder window with a laser-projected bulls-eye right in the middle jumps out from the top of the camera when you press the appropriate button. Then, while you're at a high level of zoom, the window acts as a shortcut way of ensuring you're on-target without zooming out to reassess. Olympus even set up a faux flying bird right in the middle of the CP+ show floor in Japan, hanging from the ceiling supports to draw our full-zoom fire. It's a clever shortcut to assist with framing -- it seems pitched at beginner photographers, rather than those already used to telephoto lenses and DSLRs. It's not perfect; you'll still need to ensure your shutter speed is up to scratch to grab a decent image, but it's certainly a good way of adding some extra guidance.

The 16MP Stylus SP-100 feels lighter than an entry-level DSLR and there's still a built-in flash above that new framing-assist system. Alongside that, this superzoom is also capable of up to 7 fps burst shooting (up to six frames) which should also help up the chances of getting the right actual shot. You'll be able to test it out for yourself next month, when it lands in the US priced at $400.

In this article: camera, cpplus, cpplus2014, hands-on, StylusSP-100
All products recommended by Engadget are selected by our editorial team, independent of our parent company. Some of our stories include affiliate links. If you buy something through one of these links, we may earn an affiliate commission.