Amazon offers teachers a place to sell resources they create

Sphero acquires LittleBits and its set of scientific toys 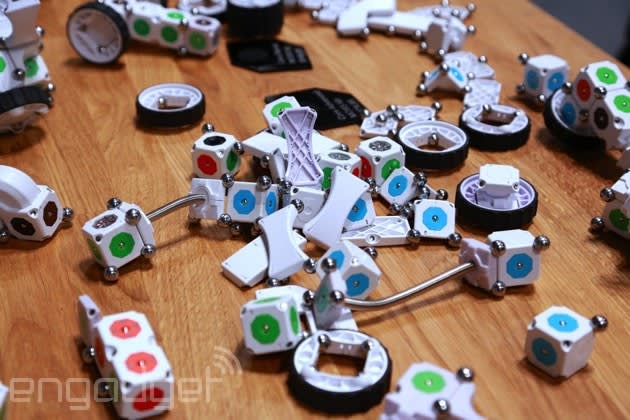 The big story at this year's Toy Fair was definitely STEM. That stands for science, technology, engineering and mathematics -- four areas of study that educational companies and bureaucracies have been pushing more students to get involved with. So it was no surprise that, as we wandered the halls of the Jacob Javits Center, we were bombarded by Tinkertoy-like offerings, science sets and robotics kits. One of the more interesting was certainly MOSS, a collection of electronic blocks from the same company that brought us Cubelets. While the basic design certainly echoes that of its stablemate, MOSS actually seems to share more genetic code with littleBits than anything else. The system consists of a set of cubes with sensors, inputs and outputs, all color-coded for easy assembly. It is possible to assemble the parts in incorrect orders (unlike with Cubelets), which is why the sets are recommended for ages 8 and up. The blocks have magnets on the corners, but don't actually snap together themselves. Instead, steel ball bearings placed in the corners secure the cubes together. Put a ball in all four corners and you'll have a rock-solid base; go with just two and you've got a hinge. That flexibility is key to MOSS' appeal. You can actually build rather large and complex creations thanks to the sizable collection of electronic components and structural pieces that give your robots personality. For example, placing four flat pieces around a wheel, attached at the joint with a single ball bearing resulted in a model swing carousel. While you might be worried that such a connection would be rather frail, it's actually quite sturdy. Even when we accidentally dropped a simple circuit involving a servo and a light sensor, the pieces stuck together (when all four corners were secured, at least). The pieces also lock into place with a satisfying click that really inspires confidence in the build quality.

The faces of the cubes are painted green for power, blue for pass through, orange for output and brown for input. Sensors or input mechanisms such as knobs are all black. Figuring out how to assemble the blocks is pretty easy: You need a power block to start, then some form of input whose orange face connects to the brown face on an output block (e.g., a motor connected to a wheel). Of course, you're only limited by your imagination and the blocks in your kit. Vehicles that follow your hand movements or even card shufflers are within your reach. If you want to get really crazy, you can get an optional Bluetooth expansion module that lets you send or receive data from an iOS or Android device. The company has cooked up a couple of example apps, such as a virtual Etch-a-Sketch and a data log, and plans to open the module to developers who wish to code for their own creations.

MOSS is available for preorder now in limited quantities, with retail availability expected sometime in April or May. The basic kit with 14 modules will set you back $150, while the exhaustive Advanced Builder kit costs $480. Over time, the company will fill out the price points in between, and even plans to release branded kits with custom modules, such as the Shotgun Tank kit with its Nerf canon.

In this article: educational, hands-on, modular robotics, MOSS, robot, STEM, toy fair, toy fair 2014, toys, video
All products recommended by Engadget are selected by our editorial team, independent of our parent company. Some of our stories include affiliate links. If you buy something through one of these links, we may earn an affiliate commission.