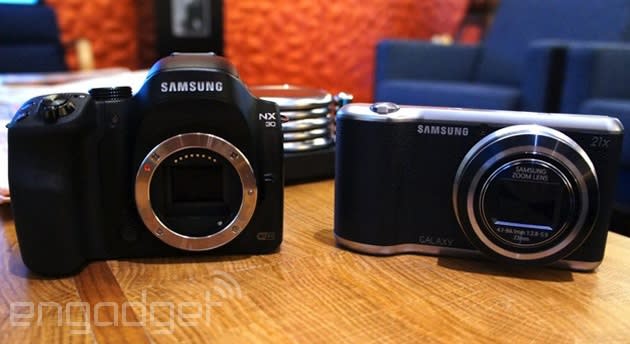 Looking to pick up Samsung's much-improved Galaxy Camera 2? The 16-megapixel Android-powered shooter can be yours next month for $450. The device includes Jelly Bean under the hood, and unlike what we experienced with the original cam, this updated version felt quite snappy during our CES demo. There's a 4.8-inch 720p display, WiFi connectivity (this model doesn't support 3G/4G) and a boosted 2,000 mAh battery. The lens doesn't appear to be improved, however, with a 21x zoom and an f/2.8-5.9 maximum aperture range. Samsung is also announcing pricing and availability for the NX30, which ships today for a whopping $1,000 with an 18-55mm kit lens. We think the company would benefit from a more aggressive MSRP there, given the competition in the mirrorless camera space, but if you aren't turned off by the price, it does appear to be a solid option.

In this article: android, camera, cameras, galaxycamera, galaxycamera2, nx, nx30, samsung
All products recommended by Engadget are selected by our editorial team, independent of our parent company. Some of our stories include affiliate links. If you buy something through one of these links, we may earn an affiliate commission.