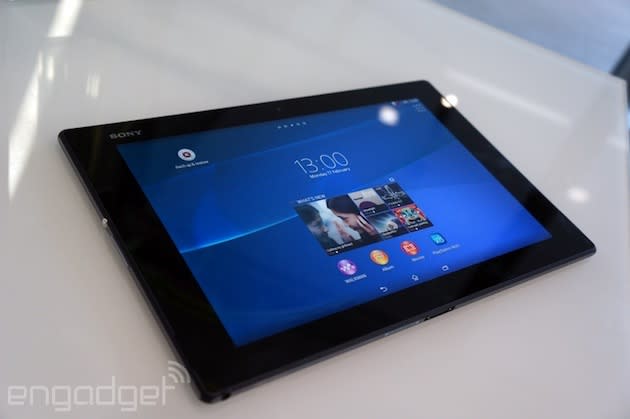 With its VAIO PC business all but gone, Sony's betting big on smartphones and tablets. The company has three post-PC products on its plate at this year's Mobile World Congress, the largest of which is the new Xperia Z2 tablet. It's a lighter, thinner version of the year-old Xperia Tablet Z, which has been given a thorough upgrade in order to help it take on the iPad Air and larger Samsung slates. Like its predecessor, the 10.1-inch tablet features the same design language as Sony's latest flagship Z2 smartphone, complete with "OmniBalance" look, uniform thickness and straight edges. Cosmetic similarities aside, the Z2 Tablet runs a lightly-skinned build of Android 4.4 KitKat and is powered by a 2.3GHz quad-core Snapdragon 801 with 3GB RAM, which keeps things really moving. Is an internal overhaul enough to capture your eye? Follow us and find out. This time last year, Sony told us that the Xperia Tablet Z was the world's thinnest and lightest tablet. At 6.9mm, the year-old slate still comes in thinner than Apple's newer iPad Air. That obviously wasn't thin enough, because Sony has shaved a few extra points of a millimeter and 70 grams off the Z2 Tablet, allowing it to make the same claim again. The form factor is far from unique, but its depth and weight reductions make up for Sony's use of enormous bezels.

That brings us onto perhaps the most important part of Sony's tablet experience: entertainment. The company debuted a suite of TV apps and services with the Tablet Z, and for the Z2 Tablet it's leaning on its movie studio arm to bundle six "blockbuster" movies. Further cementing its "one" approach, Sony's including enhanced gaming controls on both the Xperia Z2 and Z2 Tablet by way of support for the DualShock 3 PlayStation controller. Lack of controller support made many of the swipe-intensive games installed on the tablet very hard to play. Users who like their media loud will profit from Sony's decision to act on user feedback and move the side-facing speakers (where they were easily covered by fingers) to the front. It certainly made for a far better stereo experience when we played The Amazing Spiderman 2 trailer on the improved 1,920 x 1,200 pixel Triluminos display. Sony has used its BRAVIA TV technology to generate brighter and more consistent colors, by using a mix of red and green phosphor and blue LEDs.

Along with its familiar design, the Z2 Tablet comes a similar focus on enhanced imaging. It's included very latest Exmor RS sensor for this slate's 8.1-megapixel rear-facer, while the 2.2-megapixel front camera retains the same Exmor R sensor as its predecessor. Sony retains its older suite of camera apps, giving you automatic scene recognition, HDR stills and better noise reduction.

The Xperia Z2 Tablet has been given a thorough tuning, but a lot of Sony's older hardware and software features still remain. Luckily, the company isn't waiting long to get its new slate onto shelves, as it's looking to ship globally in March. You'll be able to grab a black or white model, although Sony hasn't yet told us how much they'll cost.

In this article: android, mobilepostcross, mwc2014, sony, video, waterproof, z2 tablet
All products recommended by Engadget are selected by our editorial team, independent of our parent company. Some of our stories include affiliate links. If you buy something through one of these links, we may earn an affiliate commission.