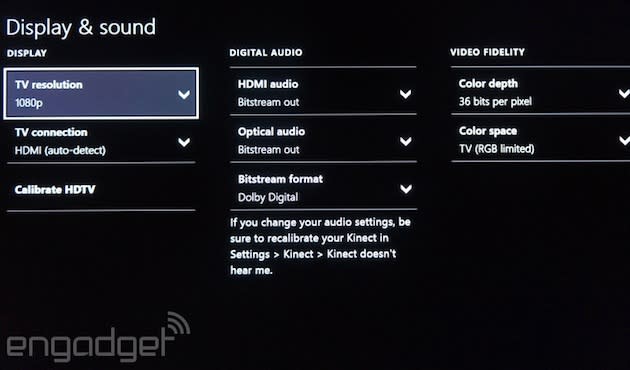 Xbox One owners who received a special ticket in their inbox are already testing out next month's update, and they've already uncovered a slew of tweaks. Beyond the multiplayer / party system changes and Twitch streaming we'd heard about, fans with surround sound headphones have been pleasantly surprised by the arrival of Dolby Digital Audio. Another new audio choice is bitstream output, and our friends at The Digital Media Zone have already checked it out to confirm the expected lights are popping up on their surround sound receivers.

Forum posters on NeoGAF has put together a list of changes they've as well, and several media related ones stick out. First, the 50Hz compatibility problem that plagued some European TV viewers using the HDMI passthrough has been fixed. Other tweaks include a check box to disable Kinect hand gestures while watching a video (which would often accidentally recognize casual movements and put an icon on the screen), and the ability to change how much the volume changes when commanded by Kinect. Hit the thread for the full list, while everyone else waits until March 11th for the update to arrive. In this article: 50hz, audio, bitstream, DolbyDigital, hdpostcross, headphones, kinect, microsoft, update, xboxone
All products recommended by Engadget are selected by our editorial team, independent of our parent company. Some of our stories include affiliate links. If you buy something through one of these links, we may earn an affiliate commission.