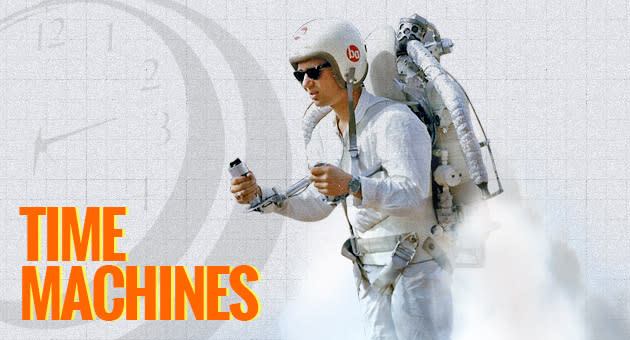 Born out of sci-fi cinema, pulp literature and a general lust for launching ourselves into the wild blue yonder, the real-world Rocket Belt began to truly unfold once the military industrial complex opened up its wallet. In the late 1950s, the US Army's Transportation Research Command (TRECOM) was looking at ways to augment the mobility of foot soldiers and enable them to bypass minefields and other obstacles on the battleground by making long-range jumps. It put out a call to various aerospace companies looking for prototypes of a Small Rocket Lift Device (SRLD). Bell Aerospace, which had built the sound-barrier-breaking X-1 aircraft for the Army Air Forces, managed to get the contract and Wendell Moore, a propulsion engineer at Bell became the technical lead. Bill Suitor geared up and ready to demo the Rocket Belt for NASA and the USGS - circa 1966.

The most viable design at Bell's Buffalo, NY, facility was a hydrogen peroxide rocket-propulsion system, which offered a relatively stable fuel with no combustion. It was dubbed the Rocket Belt and was essentially a three-tank system mounted onto a fiberglass corset molded to fit the operator. The center tank was filled with nitrogen gas and the side tanks contained a 90 percent hydrogen peroxide mix. The nitrogen would force the fuel into a gas-generating catalyst that converted it into a highly pressurized mix of oxygen and water (steam), and then out of two nozzles on either side of the operator, providing 280 pounds of thrust (and a good deal of heat). Outside of the thrust capabilities, one of the primary difficulties was in achieving a steady and stable flight. Phase one in Bell's testing was completed by December 1960, and due to the experimental nature of strapping rockets onto the test pilot (Moore himself), they were all done with a safety tether attached.

It was time to move on to phase two of the Rocket Belt's testing, which meant free-form, untethered flights. After injuring his knee in one of the flight tests, Moore had to pass on the torch to his associate and engineer Harold Graham, who took over as test pilot. After significant testing, Graham made the first successful untethered flight with the Rocket Belt in April of '61, managing to hit 10MPH during a 13-second flight and covering a total distance of 112 feet. It was a promising achievement, but fuel depletion and flight longevity were major concerns when considering potential field applications. In fact, about 10 seconds of the flight would need to be focused on making a landing. Early designs even included warning lights and a steady beeping that was piped into the pilot's headset at the 10-second countdown, as if flying around with a rocket on your back wasn't nerve-racking enough. Although, according to Bill Suitor, who later joined the team, they maintained a 100 percent safety record over the course of 3,000 flights between April 1961 and 1969. Graham's successful flight with the Rocket Belt led Bell Aerosystems on a nearly decade-long series of demonstrations for the public, press and various government officials. In October 1961, Graham even demoed the Rocket Belt for President John F. Kennedy, launching from a boat to meet the president at shore nearly 200 feet away. With the number of appearances growing, Bell needed to find more pilots and the Army even requested that untrained personnel be among them. Moore decided to offer this exciting opportunity to Suitor, his 19-year-old neighbor, and it's no great surprise that he took the job. After making 60 tethered training flights, Suitor was free to rocket about the place unrestrained and join the Rocket Belt flight team. As 1965 rolled around, already a veteran at state fair demonstrations, Suitor landed a role as stunt double for the James Bond movie Thunderball, replacing special effects with the real thing.

Although the Rocket Belt had a degree of success with its tests, it failed to meet the standards of the Army and was never put into production. In 1966, Bell took the device out to Hopi Buttes, Ariz., to show it off to NASA and the United States Geological Survey (USGS) as a potential Lunar Flying Vehicle (LFV) for upcoming moon missions. By this time, the Rocket Belt was managing to stay aloft for about 21.5 seconds and approached a maximum range of 860 feet, and eventually hit top speeds of up to 80MPH. In 1968, NASA granted Bell Aerosystems a $250,000 contract (about $1.7 million in today's market) to develop lunar vehicle concepts with its rocket system. This led to the development of various "pogo" type units, which had rigid frames and could carry up to two passengers. One of the primary avenues of research was to develop a LEAP (Lunar Escape Astronaut Pogo), which could be used as a backup plan to help astronauts stranded on the moon's surface to return to the orbiting lunar command module. Problems with limited range and rapid fuel depletion reared their heads again and the designs were never adopted. While the Rocket Belt never turned our armed forces into valley-leaping juggernauts, it continued to capture the hearts of the public. In 1984, Suitor piloted a version of the Rocket Belt during the opening ceremonies of the Los Angeles Olympics. Jetpack-type devices became a popular attraction at auto rallies, aviation shows and other high-energy gatherings. Inventors and hobbyists continued the work that Moore began at Bell Aerospace, creating their own variations of the hydrogen peroxide-powered pack, including a later model Jetbelt built by Juan Manuel Lozano Gallegos for his company Tecnologia Aeroespacial Mexicana (TAM). You can currently get one of the TAM Jetbelts built to your own custom specifications and it comes with a device that helps you make your own rocket-grade 90 percent hydrogen peroxide fuel mix. It's considerably lighter than Moore's version, using modern materials like carbon fiber and composites to accommodate slightly larger tanks for extending flight times up to 35 seconds. The TAM Jetbelt may set you back a modest $95,000, but that's still cheaper than a fully loaded Tesla Model S and once you're cruising through the air at $2,700-per-second on that first flight, money will probably be the last thing on your mind.

In this article: bell aerosystems, gear, jetpack, nasa, rocket belt, time machine, time machines, TL18JTPK, TL18TMCH, transportation, TRECOM, usgs, wendell moore, X-1
All products recommended by Engadget are selected by our editorial team, independent of our parent company. Some of our stories include affiliate links. If you buy something through one of these links, we may earn an affiliate commission.