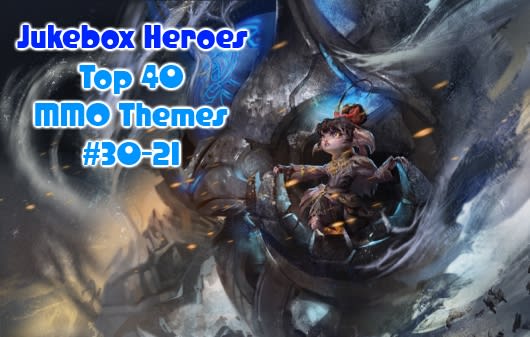 We're back with our second part of our Top 40 MMO main themes countdown, this time digging into the middle of the pack. To repeat my self-imposed rules for this list: I limited myself to just one theme from a particular title, even if there were multiple themes in a game. Entries had to be a main theme or the closest equivalent of that; they had to be from MMOs, not from MOBAs; and I had to divorce my weighting of the track itself from the popularity of and my experience with that game. So there were no points added or subtracted based on my love of the game; I'm counting down the best music, period.

If you missed the first part, check out themes #40-31. Otherwise, hit that continue button and get listening already!

Like the game itself, this theme is definitely different than the norm. It begins both fragile and beautiful, with haunting piano keys mixing with a soft voice, but it soon gets creepy and a little intense. It's not a track that makes you feel comfortable, but it is so dang memorable and perfect for the game that I don't mind at all.


29. Pirates of the Burning Sea

Yar! It be the most epic pirate theme in the MMOverse! Buccaneers and landlubbers alike agree that this is one for the ages! If you're not waving a sword around while listening to it and plundering all of the loot in sight, then you're doing this wrong.

This is the new theme for the 4.0 edition of the game, titled "Song of Katalam." It definitely has a wide focus, from a slow dramatic journey to exciting electric guitars and choral chants. It's kind of a best-of-both-worlds approach that works well in execution.

This theme is certainly not shy about its Chinese origins, nor is it hesitant to be epic when it wants to be. I am head over heels in love with this MMO's soundtrack, and this track is a good example of why. It's masterfully made and pumps out an array of powerful emotions.

I could see this theme really annoying some, especially if you're not into light and fizzy synth music, but I find it quite enjoyable. It's ridiculously upbeat and playful, two traits that attract me more often than not. The slight kick-in at 0:40 is probably my favorite moment.

Speaking of playful, you're not going to get any more chummy than this Harry Potter knockoff. This theme is a total earworm for me, getting into my head with its sparkly magical overtones and catchy melody. Subtle, this is not -- but what kids (or those young at heart) want that?

This might be fudging the list a little bit because I'm not 100% sure that this counts as a main theme, although it certainly sounds like it. I don't think you're going to hate me for including it, however, because it's heavenly. The interchange between instruments (especially the harp) as they pluck out the simple melody keeps it fresh and welcome for its entire run.

First of all, doesn't this sound like a Sims music track? To my ear, it really does. That's a compliment, by the way. "Sanctuary" delivers a vivacious trip that's almost a dance. The core melody is built up and up, and while it's repetitive, it doesn't wear out its welcome one bit. Hit that replay button!

This series has been delivering iterations on the same theme since at least Morrowind, getting more and more epic culminating in Skyrim's crowning moment of awesome. It's hard for this game to live up to that same energy, and to be honest, it doesn't. It's a good theme, make no mistake, but it's also no Skyrim. The best part is when you can hear that familiar theme pop out, especially at the four-minute mark.

Break out the angelic army; there's a song to be sung! The theme here is suitably strong but deliberately slow, which splits my opinion in twain. Part of me feels that it's too slow, especially compared to other themes in this series, but the other part really appreciates the majesty that it's trying to convey. It's good enough to almost break into the top 20, so let's leave it at that.

So what do we have left in our journey through the best MMO themes ever? You might be able to guess a few, although I'm hoping to surprise you as we count down to number one!

MMOs aren't just about looks; they also have great soundtracks that often go unnoticed. Heroes don't stand for that! Every Tuesday, Jukebox Heroes will check out a game's soundtrack and feature the best tunes to share and discuss. Your DJ for the hour is Justin Olivetti, and the request line is open!
In this article: age-of-wushu, aion, composer, composers, elder-scrolls-online, Entertainment, eso, everquest-next-landmark, featured, free-realms, game-music, guild-wars-2, gw2, Harry Potter, Its Hard, jukebox, jukebox-heroes, justin-olivetti, landmark, mabinogi, mmo-jukebox, mmo-music, music, opinion, Pirates-of-the-Burning-Sea, potbs, Sanctuary, SciTech, Song, soundtrack, soundtracks, teso, the-elder-scrolls-online, the-secret-world, tsw, wizard101
All products recommended by Engadget are selected by our editorial team, independent of our parent company. Some of our stories include affiliate links. If you buy something through one of these links, we may earn an affiliate commission.