Jawbone’s demise heralds the end of the wearables industry 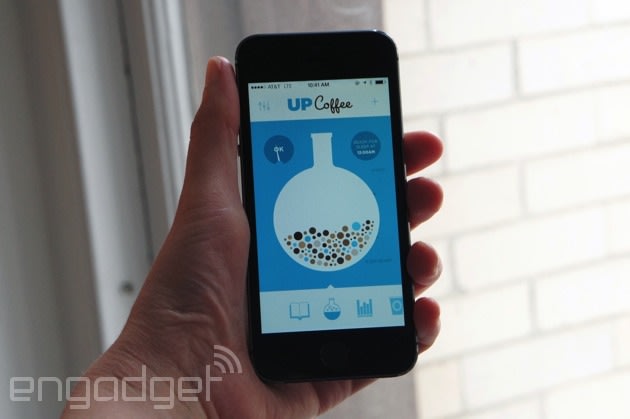 Ah, caffeine. So addictive. So energizing. So unhealthy. It's no secret that coffee lends itself to spurts of early-morning productivity, only to be followed by mid-afternoon slumps. And yet, we're somehow always surprised when that 4PM frappuccino keeps us up past a reasonable hour. "Up Coffee," a new iPhone app from Jawbone, probably won't wean you off the good stuff, but it might take the surprise out of your next coffee coma. Here's how it works: you enter a few specifics, including your sex, weight and caffeine tolerance, and then it's your job to start logging. And let's be clear here: this isn't just a coffee-tracker, but a caffeine app, so in addition to all those coffees you consume throughout the day, you also should be logging any late-night Red Bulls.

Then, with the help of some pretty graphs, Up Coffee estimates when the caffeine will wear off -- i.e., when you might be able to fall asleep. What's nice is that you can use the app even if you don't own an Up band; your sex and weight alone will help the software estimate what effect a cup of coffee will have. However, if you do happen to own a Jawbone Up band, you can link it up with the app and view your recent sleep data against your caffeine intake, confirming that yes, it really is a bad idea to drink java after five o'clock. Over time, the app might even challenge you to try experiments, as in, "What happens when you drink three cups instead of two?" There's only one way to find out.

Up Coffee is available today on iOS only. In an interview, VP of Product Management Travis Bogard would neither confirm nor deny plans to release it on Android; it all depends on how successful the iOS version is ("we'll see" were his exact words). In the meantime, Jawbone is also updating its regular app, the one that works with the Up and Up24 bands. Here, too, the updates are for iOS only -- for now, anyway. All told, the changes are fairly minor. These include: sunrise and sunset times in the sleep graph; the ability to create custom reminders; new "Today I Will" challenges; and "Insight Reports," which establish a connection between things like your bedtime and how many steps you're likely to take the next day. Oh, and you may also notice a change in terminology: Jawbone now says "sound sleep" instead of "deep sleep," which is technically a clinical term -- a narrowly defined one, at that. Again, if you're on iOS you can download the update today. If you're on Android, well, we can only assume that version will catch up eventually.

In this article: jawbone, jawboneup, jawboneupcoffee, upcoffee
All products recommended by Engadget are selected by our editorial team, independent of our parent company. Some of our stories include affiliate links. If you buy something through one of these links, we may earn an affiliate commission.