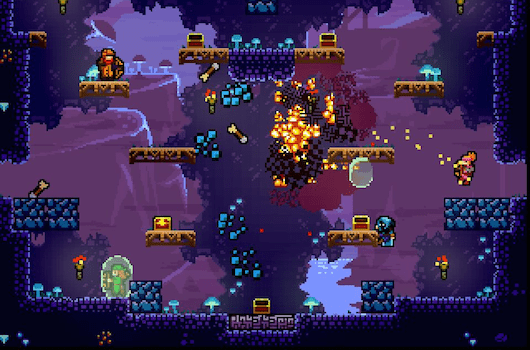 Towerfall: Ascension is picking up Quest and Trials modes along with its subtitle in its upgrade for PC and PS4. While one of the modes was announced in Ascension's previous reveal trailer, a recent PlayStation Blog post offers details on actual gameplay elements from each style of play.

In Quest mode, players can team up or fight on their own against varied waves of monsters, which the PS Blog notes range from "scythe-wielding warriors to leaping globs of slime." Some enemies will also have unique abilities, like the rival archers that can send arrows shot at them right back toward their origin.

Trials mode is a solo affair, pitting players against dummy targets and a timer. The faster players kill off their inanimate opponents, the more prestigious their rewarding medal will be. The PS Blog describes Trials stages as "addictive as they are difficult," but adds that restarting a challenge takes less than a second, which should keep the frustration focused on the game instead of loading screens.

Ascension will take its shot at PS4 and PC this week and has come a long way from its vanilla verison's Ouya-exclusive debut last year.
[Image: Matt Thorson] 60
Source: PlayStation Blog
In this article: matt-makes-games, matt-thorson, pc, playstation, ps4, quest, towerfall, towerfall-ascension, trials
All products recommended by Engadget are selected by our editorial team, independent of our parent company. Some of our stories include affiliate links. If you buy something through one of these links, we may earn an affiliate commission.