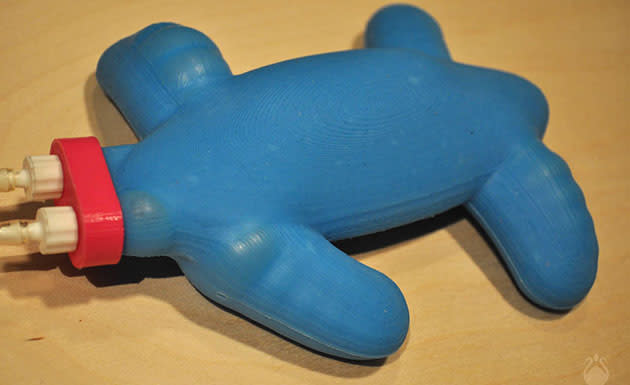 As MIT proved recently with its squishy artificial fish, robots don't need to be rigid to propel themselves along (or freak us out). A company called Super-Releaser has applied the same logic for Glaucus, its new open-source soft robot. Unlike its swimming counterpart, this bot "walks" across land using air pressure to pump up different parts of its limbs in sequence. Admittedly, that results in a locomotion speed similar to the sea slug it's named after (see the video after the break) and it requires a tether. Still, the company is developing much more practical applications that use the same tech, like orthotic cuffs for rehabilitation and prosthetic sleeves for amputees. You can even 3D print a bot yourself using Thingiverse files and (slowly) terrify your friends.

In this article: airpressure, glaucus, robot, slug, softrobot
All products recommended by Engadget are selected by our editorial team, independent of our parent company. Some of our stories include affiliate links. If you buy something through one of these links, we may earn an affiliate commission.