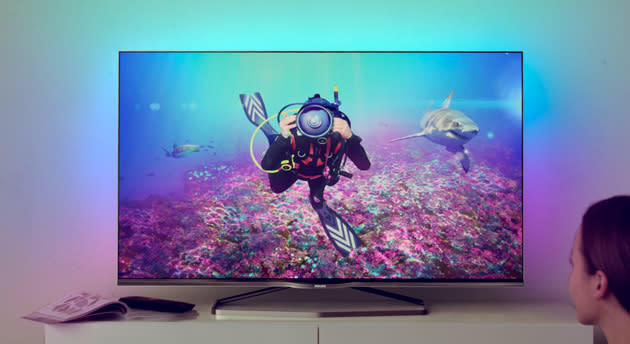 Philips' 4K TVs last year were on the large side, but it's following up in 2014 with smaller models -- including one with a few tricks up its sleeve. The company's new 55-inch 8809 series set mates the extra-high resolution with Android, giving you both Google Play apps as well as access to your Dropbox content. It's also a capable set whether or not you like the mobile OS, with a 1GHz refresh rate and Ambilight illumination that plays nicely with both games and Hue lights. There are also 48- and 55-inch 1080p sets running Android (the 8109 and 8209 series), and you can pick up the 7809 series (pictured here) in 42-, 49- and 55-inch flavors if you're comfortable using a 4K set without Google underpinnings. All of the new 7000 and 8000 series TVs should be available in Europe and Russia in the second quarter of the year, although the Android variants aren't expected to reach the UK. Pricing isn't available at this stage, but we'd expect these screens to be more affordable than Philips' 65- and 84-inch behemoths.

In this article: 4k, 7809, 8109, 8209, 8809, ambilight, android, dropbox, hdpostcross, philips, television, tpvision, tv, ultrahd
All products recommended by Engadget are selected by our editorial team, independent of our parent company. Some of our stories include affiliate links. If you buy something through one of these links, we may earn an affiliate commission.