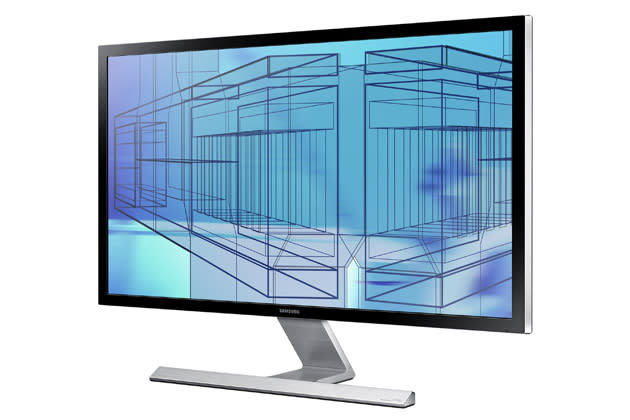 Now that Samsung's shown us the GS5, Gear 2 smartwatch and its latest Chromebook, it's time for the company's lesser-known product teams to come out of the woodwork. Next up: the display division, which today introduced three new models for 2014, including one with a billion-color, 3,840 x 2,160 screen. That would be the beaut you see above, the 28-inch UD590, which is up for pre-order for $700. In addition to that stunner of a display, it does Picture-in-Picture, with no downgrading in resolution as you move to a smaller frame. There's also a dual-screen feature called Picture-by-Picture, which you could theoretically use for split-screen gaming, even though this was really designed with creative pros in mind. Design-wise, it's fashioned out of metal, with thin bezels and a T-shaped stand that leaves room for speakers and other items you might have on your desk. Around back, you'll find a single DisplayPort, along with two HDMI 1.4 sockets for outputting 4K. In addition, Samsung announced two other monitors: the SD390 and SD590, each of which comes in 23.6- and 27-inch screen sizes. Throughout, all the monitors have 1080p resolution; the main difference is that the UD390 uses the same "Touch of Color" accents that Samsung first introduced on its TV line on a few years back. In this case, that means an emerald-colored accent and a see-through neck, in case those other black boxes are just too plain for your tastes. Those SD390 models have one HDMI and one VGA port apiece, and will start at $250 and $310 when they arrive in April. Meanwhile, the SD590 adds an extra HDMI port, and features that same space-saving T-stand used on the flagship model. That'll cost you either $270 or $330, depending on whether you get the 23.6- or 27-inch version. And yes, that too will go on sale sometime in the coming weeks.

In this article: displays, monitors, Picture-by-Picture, picture-in-picture, samsung, SD390, SD590, Touch of Color, UD590
All products recommended by Engadget are selected by our editorial team, independent of our parent company. Some of our stories include affiliate links. If you buy something through one of these links, we may earn an affiliate commission.