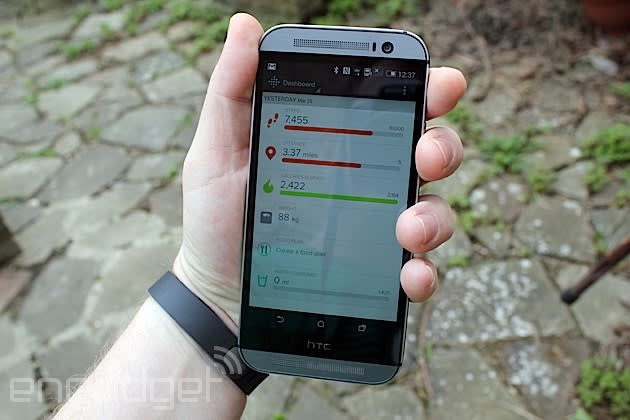 When HTC developed the new HTC One (M8) it knew it had a dilemma. If it played it safe, and did a general all-round specification bump, it risked underwhelming the public. Conversely, by over-cooking things, and innovating for innovation's sake, it could saddle the phone with software gimmicks and unnecessary hardware additions. It ultimately attempted to land on that thin strip of middle ground. We've already covered the return of the Ultrapixel, that new duo camera, and the latest version of Sense in our review. Potentially, though, it's the low-profile "Smart Sensor hub" that might prove to be the dark horse -- not just for HTC, but for Android, and smartphones as a whole. The new Smart Sensors are what enable the LG-like tap-to-unlock feature, and all those other fancy wake gestures (covered in the review) while the phone is in standby. The cool part being that HTC has given developers access to these sensors for their own projects. Fitbit was the first app to make deliberate use of it, but who will it benefit in the long run?

If you're unfamiliar with how a Fitbit device (or its any of the alternatives) works, sensors (usually an accelerometer, sometimes an altimeter too) in the wristband send data to a mobile or desktop app wirelessly, or by connecting the band directly to a PC. Most smartphones have had accelerometers in them for a number of years now, so we're left to assume that it's a practicality (read:battery) issue that's prevented handsets from performing a similar function natively so far. The new HTC One, however, has swanky new sensors in it that let it track motion without engaging the main processor, thus making it much less power-hungry. Apple did something similar with its M7 co-processor, which also takes the juice-sapping silicon out of the equation, allowing for low battery-drain constant motion recording. Incidentally, Fitbit has a similar app for iOS that performs basic motion tracking without any additional hardware. 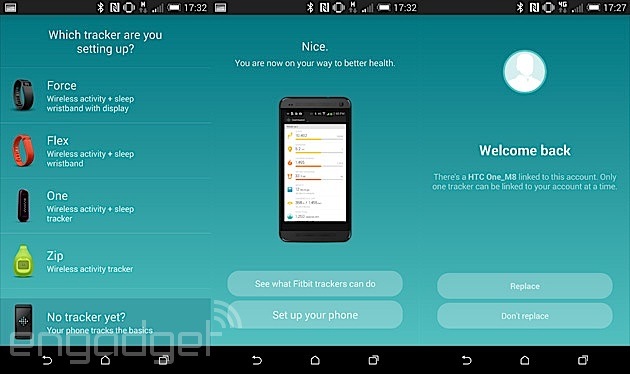 So, why didn't HTC just make its own fitness app a-la Samsung's S Health and be done with it? Well, possibly for a number of reasons. Not least, that HTC is aware that it's in the phone making game, not the fitness game. Secondly, a proprietary platform for these types of features can come across as gimmicky, inferior -- or worse, a thinly veiled attempt at locking users into an ecosystem. By working with Fitbit, HTC benefits from the expertise of one of the biggest players in the game, and its existing user base. Likewise, new HTC customers can enjoy the fitness tracking functionality, knowing that they're not locked into HTC phones forever more, and can take their data with them should they ever decide to do so. The net result is that HTC gets a neat new feature on its latest flagship, as well as a showcase app for its Smart Sensor hub API -- which is open to developers to use for a whole host of applications. What about Fitbit's end of the deal? Isn't it just cannibalizing its own business with these apps that don't require its hardware? Potentially, for a small number of fence-sitting customers -- but it's likely banking on the brand exposure it gets in return being worth it.

The reality is, however, that in its current form (on both Android and iOS), the native Fitbit app only really serves as an introduction to the concept of fitness tracking. Much like the free-to-download version of many software programs, you're left with the feeling you're quite not getting the whole experience. To start with, via the HTC One version of the Fitbit app, you can either choose the phone to be your tracker, or a Fitbit band. Not both. If you don't have a band, this means you can only track activity while you have the phone with you -- so, gym sessions or activity in the great outdoors will require lugging the handset along, and forget about swimming obviously. 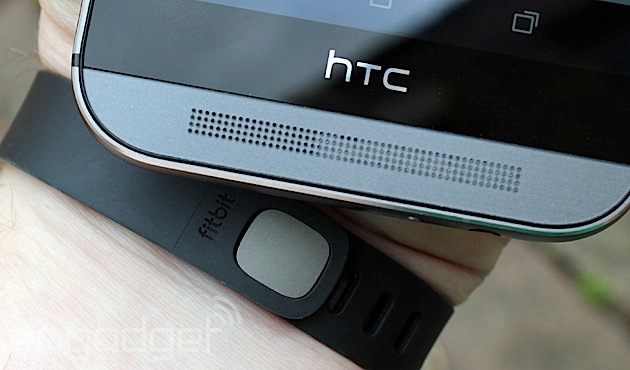 The second issue is that it doesn't appear to be as accurate (yet) as when using the traditional app with Fitbit hardware. In our early testing it looked promising, but it has since become apparent there's quite a difference between the two. We put the new HTC One side by side against Fitbit's own Flex device and by the end of the day the step counts differed by a smidge over 2,000 (we logged over 9,000 according to the Flex and another independent tracker, but just over 7,000 on the phone). On a second occasion there was nearly a 5,000 step shortfall when tracking using the phone.

You can of course still choose to use the HTC One with your own Fitbit device as before, if you already own one/want to buy one, but that just returns you to the status quo. We'd initially thought that you might be able to use the phone as a tracker along side your wristband, for those times you forgot it, or for increased accuracy, maybe even hooking into additional etc. -- but currently that's not the case. Even when Nike launched an app that uses just the iPhone 5s handset to track your movement (and earn its "Nike Fuel" score without a FuelBand), it felt more like the idea was more about engaging users in its app/platform, with the ultimate goal of converting users to (Fuelband) buyers.

It might be that the new sensors in the HTC One, and/or the API hooks as implemented by Fitbit aren't able to compete with purpose built software and hardware yet. This wouldn't be surprising; we only have to think back to early camera phones to remember how poor they were in comparison to existing point-and-shoots they now virtually replace. Or possibly, Fitbit and Nike are just "holding something back" so as not to write themselves out of the game completely. This begs the question: who profits from this latest arrangement (Nike is still Apple only, and has pretty much confirmed that's not about to change soon)?

Right now, HTC and Fitbit are clearly hoping to exchange fluids with their respective customers, but in the long term, Fitbit needs to sell hardware, especially after having to recall its Force tracker from the market. It doesn't need to start getting people used to the idea they might only need the free app (something we suspect Nike is weary of in its deal, too). HTC, on the other hand, profits from a nifty feature and brand association (in a similar way that had hoped for with Beats), but one that currently doesn't deliver. 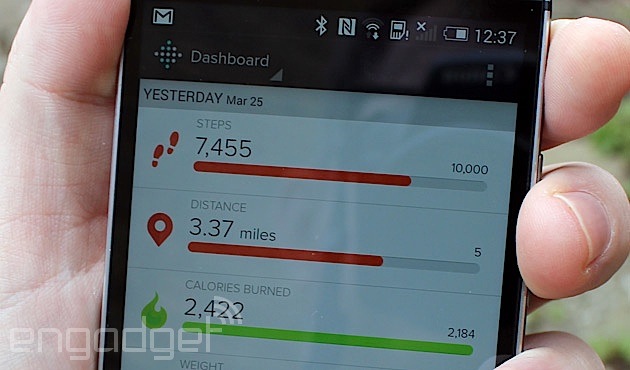 As technology develops, and becomes more ubiquitous, all-day activity tracking across multiple platforms (Android/iOS smartwatch etc.) will likely become a standard smartphone feature. We're still at the beginning of this process on both Android and iOS though. Likewise, Intel's recent acquisition suggests we could see motion tracking spread to a whole host of different devices and platforms. When this happens, it's vital that the data created on the phone is open to third-party apps just like location, orientation and so on are today, so that the stage is set for it to be utilized more freely and effectively. This leaves the likes of Fitbit et al with the same decision faced by camera-makers. Out-innovate the phones, and see how long they can stay ahead, or think long and hard about becoming a software-only proposition.

In the case of the latter, phone makers could then just bundle a generic wristband in the box (to cover the periods when a phone isn't appropriate -- like swimming), along with the headphones etc., or sell it separately as an accessory, like it appears Samsung might be considering. This would at least provide another option for brands like Fitbit to remain in the game, as an OEM. For now, however, all the current phone-only options aren't quite there yet, wristband-makers still have a market for their hardware, and other Android handset manufacturers have time to catch up.

In this article: fitbit, fitness tracker, htc, htconem8, m8, one
All products recommended by Engadget are selected by our editorial team, independent of our parent company. Some of our stories include affiliate links. If you buy something through one of these links, we may earn an affiliate commission.