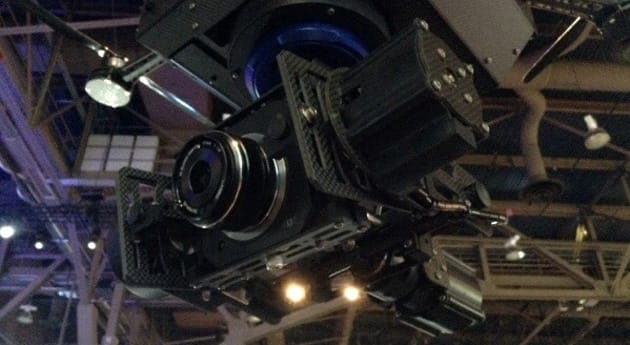 JVC wants into the digital moviemaking business, and it's kicking things off in style with a quartet of 4K camera prototypes that illustrate its cinematic ambitions. The highlight is the GW-GBLS1 (shown here), a gimbal-mounted Super 35mm camera tailor-made for aerial drones. It can not only shoot overhead 4K footage, but stream the live video to the ground -- handy for both coordinating movie shoots and sparing news broadcasters the trouble of launching a helicopter. There's also the GW-SPLS1, a remote-controlled miniature 4K camera for trickier shots. More conventional cinematographers should be happy, too. The GY-LSX1 puts 4K and super slow-motion 240p video into a shoulder-mounted camera, while the GY-LSX2 stuffs the LSX1's sensor into a camcorder that uses Micro Four Thirds lenses. JVC hasn't said if or when these particular cameras will reach studios, but we wouldn't count on the aerial model reaching the US without legal clarity regarding commercial drone flights.

Via: No Film School, DV Info
Source: JVC
In this article: 4k, camcorder, camera, drone, gw-gbls1, gw-spls1, gy-lsx1, gy-lsx2, jvc, microfourthirds, movies, nab2014, Super35mm, uav
All products recommended by Engadget are selected by our editorial team, independent of our parent company. Some of our stories include affiliate links. If you buy something through one of these links, we may earn an affiliate commission.