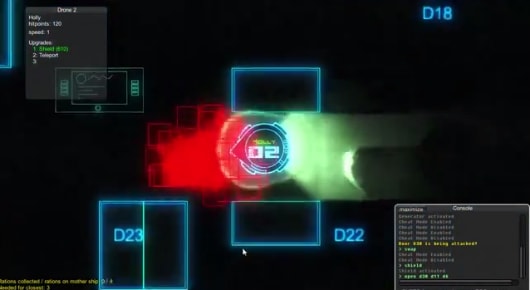 The last time we spoke with Misfits Attic founder Tim Keenan about this game, it was called Scavenger, and it was a paper prototype starring tower-defense mechanics and a Han Solo-esque character traveling the galaxy to pay off his debts. Now, it's called Duskers, and it's darker. The game has migrated to the screen, and it's no longer tower defense; instead, it's a roguelike with RTS and dungeon-crawling aspects in a survival-horror setting.

"You pilot drones into derelict spaceships to find the means to survive and piece together how the universe became a giant graveyard," Keenan explains in his pitch video. In Hollywood terms, Keenan compares Duskers to The Road and the original Alien.

The art in the pitch video is temporary, but the mechanics are nearing their final forms. Players must use power-ups and abilities to outsmart and avoid enemies waiting behind various spaceship doors. "The game's strongest moments come when you feel that there is no solution to a problem, but then by creatively thinking about what upgrades you have and the predicament you're in, you have this MacGyver-type moment where you come up with a plan," Keenan says.

Keenan is looking at funding options for Duskers (Kickstarter is the "worst case" option), but the tentative plan is to get it on Steam Early Access for PC this year, with a full launch in 2015, he tells Joystiq. So far, his previous game, A Virus Named Tom, has kept the lights on, but it's not quite enough to fund a second game. Misfits Attic has a few projects in the works right now.
Source: MisfitsAttic on YouTube
In this article: duskers, horror, Indie, Misfits-Attic, pc, prototype, roguelike, RTS, Survival-Horror, tim-keenan
All products recommended by Engadget are selected by our editorial team, independent of our parent company. Some of our stories include affiliate links. If you buy something through one of these links, we may earn an affiliate commission.