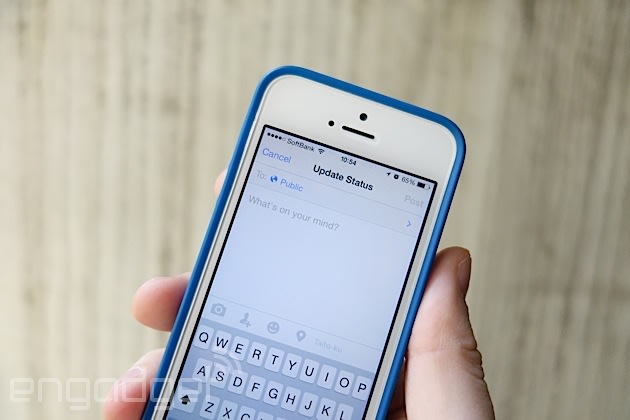 One of the first things I do before I post anything on Facebook is to make sure I know exactly who will see it. If it's a vacation photo of me and my husband, I restrict it to friends and family. If it's just a link to something funny on the internet, I might post it for all the world to see. It's fairly obvious, to me at least, what's meant to be public and what's not. However, that's because I took the time and energy to navigate through Facebook's privacy settings and learn how to protect my updates. Not everyone has the foresight or the luxury to do that -- especially if you joined in college, when such issues might not have mattered so much. It turns out Facebook is all too aware of this problem, and is trying to hammer out some possible solutions.

At a session with reporters on Tuesday, Facebook revealed that based on thousands of surveys per day, a significant number of its users are surprised when their posts are seen by people they don't know. This, the company realizes, is a problem. "When people have an unpleasant surprise like this," said Mike Nowak, Facebook's privacy product manager, "It's bad for them, and it's bad for us." When asked even further about what it is about the current system that confuses its users, a spokesperson attributes it to potential cultural differences, and simply the need for more education. 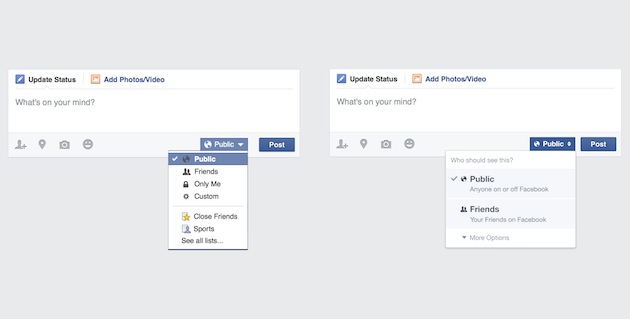 Therefore, rather than introducing even further privacy controls, Facebook has decided that the right approach is to give its existing ones more visibility. In a recent update to Facebook's mobile app, the "audience selector" (a drop-down menu that shows who can see your updates) was moved from the lower right corner to the very top so that it's the first thing people see. Further down the road, the company hopes to roll out a test to its desktop users that will spell out exactly what "Public" and "Friends" mean (see above for a preview). Even more than just increased visibility, Facebook also wants its users to be more aware of who can see their posts. In the near future, the company hopes to roll out a "Privacy Checkup" box to simply make sure people are sharing updates with their intended audience. The same goes when a friend reshares a post -- there'll be a notification letting you know it'll be seen by his or her friends as well. 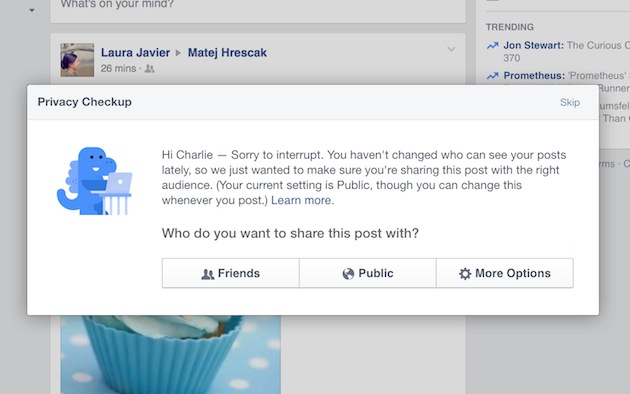 While these tweaks may seem rather straightforward at first glance, it's in Facebook's best interest to make sure its privacy controls are crystal clear. After all, Facebook's issues with privacy have been well-documented. From accidental breaches to targeted advertising, the public has every reason to be fearful and skeptical of a company maligned by complicated privacy settings and a post setting that's public by default. It's all made even more crucial by the fact that Facebook encourages you to use your real name and that your profile photo along with your cover photo are always public. The reason is "to disambiguate you from other people in the world," said Raylene Yung, a Facebook privacy engineering manager. Publicly available information such as your name allows your friends to find you, she says, and it's arguably one of the core functions of Facebook. That said, the company does plan to let you restrict older cover photos to a limited audience in the next few weeks.

"Our goals haven't changed," said Yung. "We want people to be aware and be comfortable with sharing with the right people all the time."

In this article: facebook, privacy, privacysettings, public
All products recommended by Engadget are selected by our editorial team, independent of our parent company. Some of our stories include affiliate links. If you buy something through one of these links, we may earn an affiliate commission.