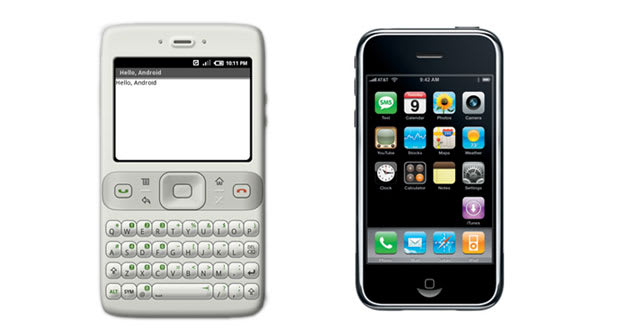 Ahead of Apple revealing its first smartphone, Google's plans for Android back in 2006 involved physical keys for control and no touchscreen input support. Revealed in court documents from the ensuing Apple-Samsung legal fray, the early specification says that "the product [Android] was designed with the presence of discrete physical buttons as an assumption. However, there is nothing fundamental in the product's architecture that prevents the support of touchscreen in the future." (The above render is from Google's initial SDK, but by then, touchscreen integration was now part of the official spec.)

In this 2006 documentation, many of the Android staples (both in software and hardware) get a mention, including removable storage, third-party application support, widgets, notifications and all those Google services. Between the announcement of the iPhone and finalizing Android's software requirements, touchscreen input was not only supported -- multi-input touch was required, and our phones were never the same again.

Via: Recode
Source: Android Software functional requirements (1), (2)
In this article: android, apple, court, google, iphone, legal, mobilepostcross, patent, touchscreen
All products recommended by Engadget are selected by our editorial team, independent of our parent company. Some of our stories include affiliate links. If you buy something through one of these links, we may earn an affiliate commission.