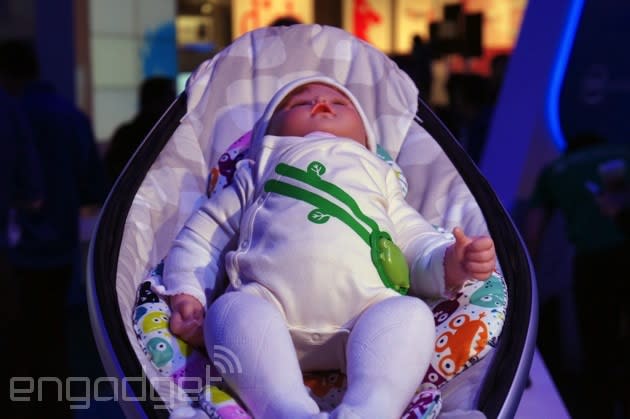 If you set foot in Intel's CES booth this winter, you probably sensed a theme: the company is deeply, almost manically, focused on the Internet of Things. Sure, Chipzilla was showing off some tablets and phones, along with a shelf full of Ultrabooks, but the highlights of the show were all a little more unusual. Think: a light-up "smart mug," headphones that can monitor your heart rate. An internet-connected baby onesie, for crying out loud. It was obvious the company was a bit obsessed, and now it's clear why: the Internet of Things is currently the most promising piece of Intel's business.

But the Internet of Things -- now that's a bright spot. Sales there were up 32 percent from the year-earlier period. We know, we know: that's partly because the Internet of Things simply wasn't, uh, a thing last year. But the numbers do suggest that where there's demand for some sort of "smart" object, Intel has a strong chance of getting one of its chips inside. That's good news for Intel, but maybe not good enough: even with a booming smart coffee-mug market, connected objects still accounted for just 3.8 percent of Intel's overall sales last quarter. How long will it take smart baby onesies to catch up before Intel doesn't have to use PCs as a crutch? And what's the deal with that tanking mobile business, anyway? We'll let you chew on that while we wait for Intel to host a conference call. We'll update this post if we glean any new details.

In this article: earnings, EarningsReports, intel, InternetOfThings
All products recommended by Engadget are selected by our editorial team, independent of our parent company. Some of our stories include affiliate links. If you buy something through one of these links, we may earn an affiliate commission.