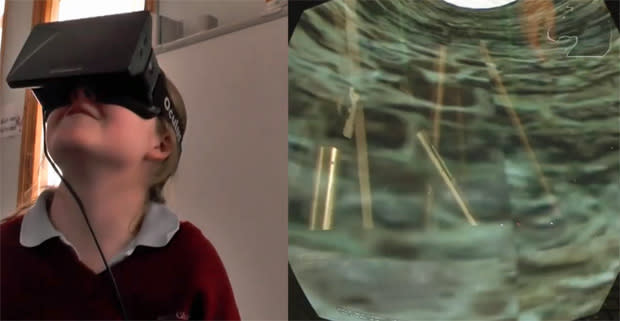 If games, wildlife documentaries and virtual strolls in the park aren't enough to validate virtual reality for you, try this one: educational motivation. School children in Ireland have been using a open source version of Second Life to learn coding, 3D modeling and to create virtual spaces of recent field trips. Their most recent project: recreating the monastery of Clonmacnoise and exploring it with an Oculus Rift. Technically the Rift isn't part of the classroom's normal operations -- the founder of the MissionV virtual reality platform the school is visiting brought it with him on a recent visit -- but it did give the students a new perspective on the world they had built. "Whoa," one student exclaimed, looking at the classroom's recreation of Clonmacnoise's McCarthy Tower. "That is humongous."

"The children spent two weeks building the model and were intimately familiar with the layout of the site and buildings as the appeared on the PC monitor," MissionV founder and CEO James Corbett explained. "But the full realization of the scale and perspective of what they built only dawned on them when they were immersed in this reality." Having a virtual presence in the model actually changed how the children learned about it -- and the promise of being able to play in the world they built was bound to be a heck of a motivator, too. It's still too early to say if VR will become a common tool in education, but it's still a blast to watch these kids romp around in a world of their own making. Check it out in the video below.

In this article: children, education, ireland, oculusrift, school, video, virtualreality, vr
All products recommended by Engadget are selected by our editorial team, independent of our parent company. Some of our stories include affiliate links. If you buy something through one of these links, we may earn an affiliate commission.