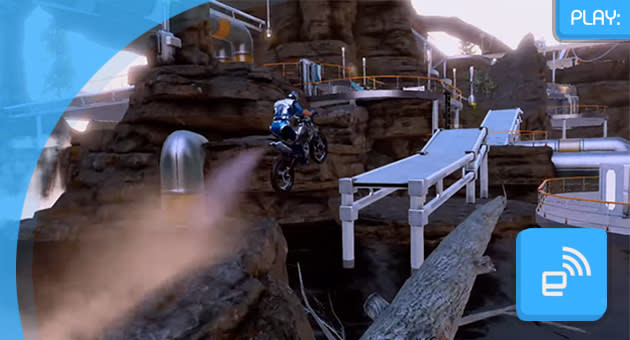 Some games are so challenging, frustrating and physically draining that your controller could easily explode against the nearest wall at any second. Trials Fusion is one of those games: A repetitive, soul-destroying platformer that'll have you playing the same level for hours on end, all in the hope you'll shave mere milliseconds from your previous best. However, it's only from the epicentre of this nightmare, through the tired workings of your callused, nail-bitten hands, that one experiences true gaming gratification. As with other games of this genre like Super Meat Boy or the Super Monkey Ball series, to name a few, the premise is devilishly simple. You must successfully navigate an obstacle course in the least possible time, mistakes not recommended. As its name suggests, Trials Fusion is based on the sport of motorcycle trials, with some motocross mixed in. Just it's more arcadey, and probably harder.

Stop, go. Lean forward, lean back. These are the tools you have at your disposal, and combined with the game's realistic (or should we say predictable?) physics engine, all you'll need. The baby of a long line of trials-based titles, Fusion introduces a basic trick system for use on special, stunt-orientated levels that add a little variety to the classic game mode. Track challenges, too, give you other objectives to focus on when racing the clock has you burnt out, but don't take that to mean they're easy. Variety's no bad thing, but fundamentally this instalment is the same as every other Trials game before it, which is awesome. New tracks, better graphics: Sold.

Fusion doesn't tamper with the formula of its ancestors for good reason, but that probably means you'll either like it, or you won't. Tracks get much longer, and much harder, pretty quickly, and there's nothing new in Fusion that'll prevent a casual gamer from succumbing to the grind. Only the truly committed will be rewarded with the euphoria that is nailing a perfect run and climbing the leaderboards while your friends wallow in anonymity. But, with this comes the promise of fruitless evenings, sleepless nights and premature aging.

As much as we're suckers for classic Trials gameplay, there are some notable issues with Fusion. The game's menu screens are a jumbled, awful mess, fand 3D models on the bike selection screen take almost as long to load as levels do (Xbox One digital copy). Then there's the lack of true online multiplayer. Sure, the leaderboards give you one way to compete against the world, but the side-by-side supercross racing of Trials Evolution is nowhere to be found. A similar and supposedly better "Competition" mode is due to fill that void within the next few months, but that doesn't excuse its absence at launch. Until that arrives, though, you'll have to rely on the level creator and community-generated tracks to hold your attention outside of the main game.

Anyway, enough from us. It's halfway through the bank holiday already, and you won't make any impact on the leaderboards enjoying the sun with family and friends. Clock's ticking...

Trials Fusion is out now for PS4, Xbox 360, Xbox One and Windows PCs.

In this article: game, play, playuk, ps4, trials, trialsevolution, trialsfusion, uk-feature, xbox360, xboxone
All products recommended by Engadget are selected by our editorial team, independent of our parent company. Some of our stories include affiliate links. If you buy something through one of these links, we may earn an affiliate commission.