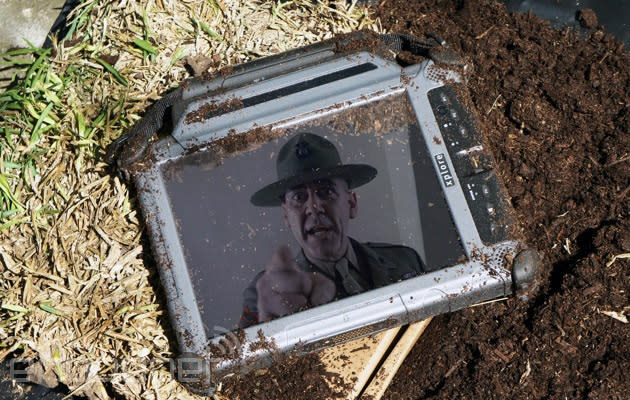 When a company sends you a tablet buried under a half foot of sopping-wet turf, you can be reasonably sure that the hardware's going to be sturdier than your average kit. Xplore Technologies makes computing devices for the harshest of environments, including warzones, so we thought we would spend some time with the company's latest slab. The XC6 is the most powerful unit the company has ever released, packing Intel's Haswell internals and a 1,300-nit display. Like Lady Gaga, the XC6 likes it rough, so we grew out our beard, grabbed a sledgehammer and did some extreme computing for our enjoyment. If the most that you do with your tablet is check Twitter while sitting in a restroom stall, then it shouldn't be a surprise to learn that the XC6 is a tad overkill. Since it's been designed to be used by oil-rig workers, soldiers, census takers and civil engineers, among other dangerous professions, it's designed to take a lot of rough treatment. Weighing in at 5.4 pounds, it's got a magnesium-alloy chassis, coated with liberal amounts of rubber over the port bays and corners. It's rated for IP67 and MIL-STD-810G, so it should be able to handle being submerged into a meter of water for half an hour, as well as hot, cold, sand and extreme humidity. What we were able to do is leave this machine in our freezer for a few hours, only to find it still cheerily working, as well as take it into the shower with us for a casual spot of surfing while we rinsed ourselves clean. Reportedly, this unit is able to withstand drops from seven feet onto concrete, something that we tested with glee. There's a 5-megapixel camera on the back with a fixed focal length that's great for taking pictures of barcodes, and useless for anything else. There's a 720p front-facer, which is perfectly acceptable for Skype chats, but not much else. Despite the austere construction, there are a few surprising additions to the input list, with Gigabit Ethernet and HDMI-out alongside the usual complement of a fingerprint scanner, a pair of USB 3.0 ports and a 3.5mm headphone jack. In order to ensure that the device can withstand gloves and extreme temperatures, Xplore has eschewed a capacitive touchscreen in favor of a heavy-duty resistive one. Thankfully, there's a pair of styluses available that'll help you navigate around the device, and while it can work with gloves, it'll require a hefty press. We did find that gestures in Windows 8 (for the Charms Bar) didn't work unless we used the stylus, unfortunately. That 1,300-nit display is also strong enough to hold its own in direct sunlight, making it much more visible than the average laptop in similar conditions -- although it's by no means comfortable if you're without shade for long periods of time. Another thing that we noticed is an odd amount of ghosting, with the previous screens lingering on the display as we flicked between various applications. We didn't have time to run any in-depth battery life tests, but were able to run the XC6 through 3DMark 11 to offer us some indication of its ability to handle tasks. You may be surprised to learn that it managed to crank out benchmarks of E1,801, P898 and X299 -- figures that put it very close to Lenovo's IdeaPad Yoga 2 Pro. Given that it's packing a 1.9GHz Haswell Core i5-4300U with 4GB RAM and a 128GB SSD, we can be sure that while it may look like a piece of farm equipment, it's certainly no tractor. It's launching today, with the base model setting you back a whopping $5,299 -- and more if you want to add in a Core i7 or other accessories like a card reader, or, who knows, maybe a rocket launcher.

In this article: hands-on, microsoft, Military, Tablet, Windows 8, XC6, Xplore Technologies, Xplore XC6
All products recommended by Engadget are selected by our editorial team, independent of our parent company. Some of our stories include affiliate links. If you buy something through one of these links, we may earn an affiliate commission.