The FBI wants to crack another iPhone after Minnesota stabbings 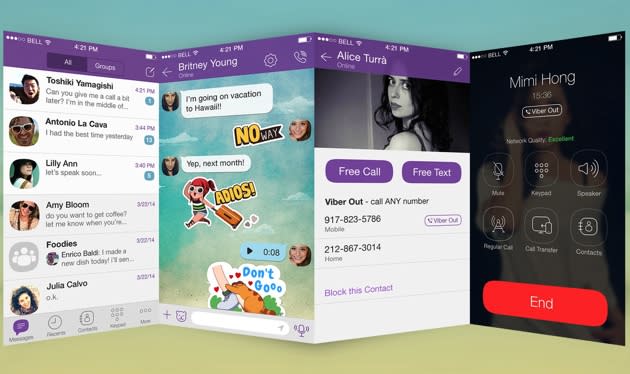 Internet calling and messaging service Viber does a solid job of constantly bringing new features to its apps, regardless of the platform. Now, some seven months after iOS 7 was released, Viber is finally changing the looks of its iPhone app to match that flat, minimalist appearance of Apple's OS. Aside from overhauling the UI, the Viber application now also lets you create a list of numbers you'd like to block and send longer video messages to people. The company's CEO, Talmon Marco, tells us this update isn't just about iOS 7, however. "This is the first time we are introducing a new look and feel for Viber. Our goal was to create a simple and friendly interface but at the same time establish a solid foundation for future updates," Marco stated. In other words, don't be surprised when you see some of these design cues make their way to other Viber apps, like those on Windows Phone 8 and Android.

Furthermore, Viber has also released an app for BlackBerry 10, complete with all the voice and messaging features that have made it popular on other devices. By doing this, Viber is now well covered within BlackBerry's ecosystem, since it already offers an application on older BB handsets. "Our BlackBerry 10 app is a beautiful twist on our design delivering the most up to date experience for our users," said Marco about the new app.

In this article: iOS 7, iOS7, iPhone, mobilepostcross, Viber, Viber app, VoIP, VoIPCalling
All products recommended by Engadget are selected by our editorial team, independent of our parent company. Some of our stories include affiliate links. If you buy something through one of these links, we may earn an affiliate commission.