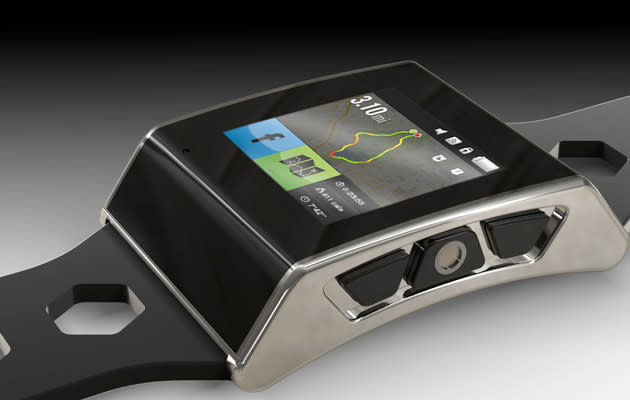 When we got our hands on Exetech's XS-3, we were intrigued by the idea of cramming a smartphone into a watch, but dismayed at the execution. After all, this was a device that was in no way waterproof, had a 420mAh battery pressing directly onto your skin and wouldn't even last half a day on a charge. Having sold 800 out of a production run of 1,500, the company found that customers loved the technical accomplishments, but griped about the build quality.

That's why Exetech is asking for a do-over when it comes to the XS-4.

The company is re-launching on Indiegogo in order to raise the €35,000 necessary to begin producing the revamped version of the wearable device, and has pledged to fix most of the issues we found last time. First up, the unit will be coated in a fluoropolymer which, it's hoped, will give the watch IP-67 waterproofing. Then there's the design, which isn't changing overall, but will get a curved touchscreen and metal buttons to look and feel a little sleeker.

One of the biggest issues that we had was with the paltry battery life, and while the unit will still be pushed up against your wrist, the XS-4 will give you the option of picking up an 800mAh unit as an optional extra. The company is also promising that the watch will gain the same perpetual solar charging technology that we saw on TAG Heuer's latest smartphone. Most of the internals will remain the same, except that it'll get a 4G radio and will run on Android 4.4. Founder Fabiano Zamuner says that the XS-4 and devices of its kin will be the "future of smartwatches," and if you agree, you can back the project for €169, which'll get you one of the first units to come off the production lines in November.

In this article: Exetech, Indiegogo, mobilepostcross, Smartwatch, Wearables, XS-3, XS-4
All products recommended by Engadget are selected by our editorial team, independent of our parent company. Some of our stories include affiliate links. If you buy something through one of these links, we may earn an affiliate commission.