It's time for Hellscream to pay.

Or at least that's what everyone in War Crimes would enjoy seeing, to varying degrees. Christie Golden's latest novel, War Crimes, is due out next week on May 6. It tells the tale of Garrosh Hellscream's trial, an event many players have been waiting to hear about -- and it also serves as a bridge novel, of sorts, between Mists of Pandaria and the upcoming expansion Warlords of Draenor. If you'd like to know how Garrosh wriggled out of his presumably inevitable death and got to Draenor, this is the book you want to read.

But it's so much more than that. In War Crimes, the focus is much less on Garrosh, and much more on the people around him -- those called to the witness stand, and those simply observing the trial in progress. It's a sweep of almost every major face in the Alliance and Horde, and their unique individual reactions to what happened during Hellscream's reign. In that, it's a very different kind of novel -- and I think it was just the novel needed to bring this expansion fully to a close.

Please note: Because War Crimes has yet to be released, this will be a spoiler-free review. Please refrain from talking about spoilers in the comments -- any spoiler information posted will be deleted. 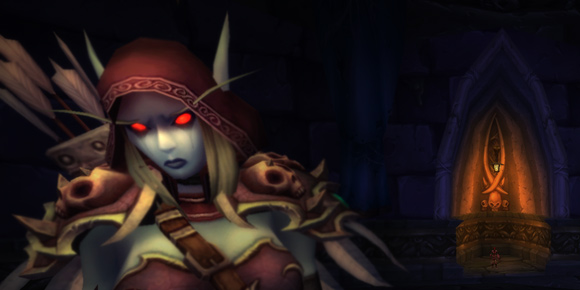 It's almost a given that Christie Golden knows her Warcraft characters, and in War Crimes she's been given a far larger cast of characters to work with than ever before. While characters like Anduin Wrynn and Jaina Proudmoore have been touched on before, it was a pleasant surprise to see her focus on characters she's never really written about. Both Sylvanas and Vereesa Windrunner get a lot of play in the novel, something that fans should appreciate -- and Golden flat-out proved she understands the banshee queen and her reasoning in a fashion both utterly horrifying and oddly touching all at the same time.

Obviously Jaina Proudmoore gets quite a bit of play in the novel as well. As the former leader of Theramore, Jaina's been dealing with the aftermath of her beloved city's destruction all through Mists of Pandaria. We've seen many different sides of Proudmoore, but one thing has been made blatantly clear -- she knows which side of the faction line she's standing on, and she's fully accepted that side in the wake of the tremendous losses she's experienced. War Crimes hits on that, but takes Jaina one step further, and resolves her particular story in a satisfying way that is still just open-ended enough to reassure the reader that we haven't seen the last of her.

Far more interesting, however, was the dynamic that played out with Anduin Wrynn. Love him or hate him, Anduin's come into his own as a real character in Mists. While we've seen him quite a bit in-game, we haven't really had the opportunity to get inside his head and see what he was thinking. We saw him a little in Tides of War, but not enough to be really meaningful. In War Crimes, Anduin finally gets another in-depth look, and several visits with Garrosh Hellscream, one of which was available in a novel excerpt released earlier this year.

For many players, it's almost seemed like Anduin has filled the role that Jaina vacated when Theramore was destroyed -- the role of the eternally optimistic peacekeeper and diplomat that truly believed no one in the world was as evil as they seemed. In some ways, they might be correct with that assumption. But the Anduin we see in War Crimes is far, far more than that. He isn't a character blinded by optimism -- he's a very real presentation of a young man struggling to sort out exactly where in the world he's supposed to fit in.

As Prince of Stormwind, it's a natural assumption that one day Anduin will be king. But at roughly 16 years of age, people have yet to take him entirely seriously. Given that his father Varian was crowned at 18, it's natural for Anduin to be trying to establish his own decisions and gain a little more freedom. In War Crimes, we see his struggle with that -- and we get a glimpse into the mind of a mostly mature young man and his relationship with others, be it Jaina, Varian, Wrathion, or even Garrosh. Oddly enough, it's those conversations with Garrosh that really seal the deal on Anduin's character, a character far more complex than just in-game text would lead you to believe.

That said, the novel is interesting in the way that it's presented. Yes, there is a lot of new material -- but there are also visits back to old quests and events, both in World of Warcraft and prior novels and games. In that way, it kind of felt like one of those flashback episodes you see on television every now and again, with entire sections of books being dutifully played out word-for-word from their prior novelization. At first, this was slightly off-putting, largely because I'm really familiar with the Warcraft library of novels and had read most of these scenes more than once.

But as the novel continued, the flashbacks really began to work for me. This wasn't just a "remember that time when" bland list of flashback references. Sure, in many cases the information being revealed in these flashbacks was old information to me, but it was completely new information to many members of the cast. By having all these private scenes the reader knew about suddenly flung open and made public, it not only made for a lot of dramatic scenes, it also laid the foundation for future conflicts between characters that otherwise might have continued on completely unaware of what was going on when they weren't looking.

More importantly -- Warcraft lore is sometimes confusing. It's sometimes difficult to keep track of events, and even harder to keep track of how a character has progressed through these events. The use of flashbacks drew a direct line through an increasingly complicated chain of events that led to Hellscream's reign and downfall. A lot of questions players had about various character's reactions to events or seemingly odd changes in reasoning were explained with crystal-clarity in War Crimes. In a way, the book served not only as new lore, but a catch-up on existing lore.

If you've never read any of the other novels prior to War Crimes, that's not really an issue, because the very nature of the novel itself catches you up on everything you might have missed, and does so in a way that is entirely relevant to the story at hand. And that's where the book really shines. Even those that haven't really read Warcraft lore at all will be able to easily follow what's going on in War Crimes, and relate it to the current expansion, and the expansion to come. And if, in reading the novel, you find a particular flashback fascinating and want to know more about it, you can simply pick up the novel the flashback came from and read the entire story.

War Crimes wasn't a really action-oriented book. Certainly there were fight scenes, yes there were struggles, but the majority of the content in the novel wasn't so much about "What is this character doing?" as "Why does this character feel the way they feel?" Honestly, that was something we really needed to see, something that couldn't really be conveyed in a few short lines in a video game. I've always said that the novels are worth reading because they give you that glimpse into a character's mind that you just can't get by playing the game -- War Crimes embraces that notion and gives us a gigantic dose of that unique perspective on characters, and it really, really works.

Of course this is all secondary to the plot itself. I won't really go into spoilers, but we all know two things right off the bat going into the book. First, Garrosh Hellscream is on trial. We see that trial presented, case by case. Second, Garrosh somehow gets from this trial, to Draenor -- and that is clearly explained as well by the end of the book. The trial itself takes place in Pandaria, as requested by Taran Zhu at the end of the Siege of Orgrimmar -- but because Garrosh's crimes affect so many, all of Azeroth's leaders and major players are summoned to the Temple of the White Tiger to both testify and witness.

Tyrande Whisperwind serves as the Accuser, and lays the case for why Garrosh Hellscream should be executed. In the unenviable position of Defender is Baine Bloodhoof, which seems like an unlikely choice. Baine's struggles with this duty he'd rather not perform are really well-written -- you can't help but feel badly for him, and then you can't help but admire him for it. Keep in mind that unlike trials out here in the real world, Baine is not trying to prove Garrosh's innocence. He's simply defending why Hellscream shouldn't be getting the axe.

And, at last, we have Garrosh Hellscream. Oddly enough, for a book about Hellscream's trial, we don't really see a lot of Garrosh himself. This isn't a book about Garrosh. It's a book about how everyone else reacts to Garrosh, what he did, and how their reactions to what he did reflect on themselves. But we do get some good scenes with the former Warchief, and a little more of a glimpse into his reasoning behind everything that he's done. It's not a pretty picture, but the picture is there, and clearly laid out.

To be perfectly honest, this was one of my favorite novels to date. In-game, Mists of Pandaria wrapped up with the end of the Siege of Orgrimmar. But it never felt like a really satisfying ending, and there were far too many questions left involving the assorted cast of characters involved that were simply left unanswered. While Golden doesn't answer every question under the sun, she manages to take the largest cast of major characters I have ever seen in a Warcraft novel and weave a tale that elegantly answers most of the questions left after the Siege's end, and even a few we hadn't really thought about.