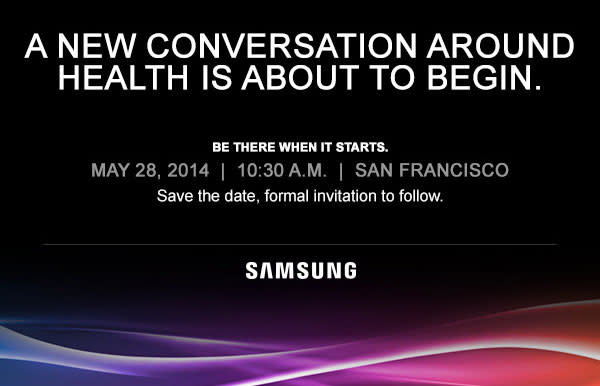 Health. It's the new smartphone -- or the current best excuse to buy a fancy new wearable. And apparently, Samsung isn't done with merely the Gear Fit and a (possibly unused) S Health app. We just received an invite to SF-based event on May 28th, where the company is planning a "new conversation around health". That' means it's scheduled just before Apple's annual WWDC, where it's expected to show off a health-centered refresh to its product family. Our invite came from Samsung's Strategy and Innovation arm so it could be about well, anything, rather than, say, Fit Version 2. (The original Galaxy Gear was kicking around for less than six months before the company wheeled out a sequel, so who knows). We'll be there and we'll tell you more when we hear it.

In this article: event, gearfit, health, samsung, wearables
All products recommended by Engadget are selected by our editorial team, independent of our parent company. Some of our stories include affiliate links. If you buy something through one of these links, we may earn an affiliate commission.