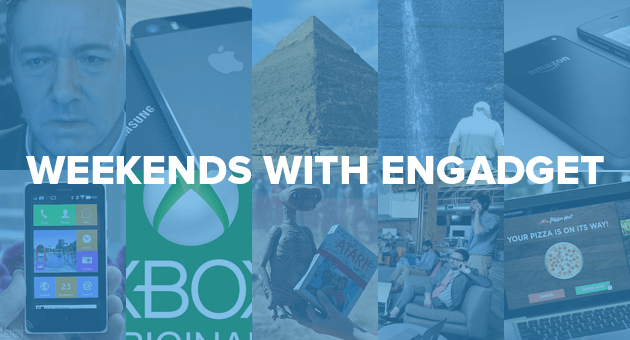 The new Engadget: it's all about you... except when it's about us

Like technology, Engadget is evolving. Our new Editor-in-Chief Michael Gorman and Executive Editor Christopher Trout tell you about how we plan to be your guide for this connected life. With the acquisition by Microsoft now complete, it is a weird time for Nokia to be releasing an Android phone. Yet, here we are. Meet the Nokia X, a $120 device aimed at developing markets, from a manufacturer that, for a long time, devoted itself to Windows Phone. The first trailer for Call of Duty: Advanced Warfare is out. And interestingly enough, the House of Cards actor Kevin Spacey appears to be cast as a (surprise, surprise) powerful, politically driven antihero. What do we know about Amazon's upcoming smartphone? Well, according to BGR, it's got 2GB of RAM, six cameras and looks like the picture seen above. Everything else about it remains a mystery. The latest chapter in Apple and Samsung's global legal war has come to a close. Though there's still one outstanding damages issue left to decide, the jury delivered a verdict that has Samsung owing Apple almost $120 million. However, that's not necessarily bad news for the Korean company. We don't know a ton about Xbox Entertainment Studio's future plans, but we've learned a bit more about its push into original programming. According to XES president Nancy Tellem, the studio has 12 projects in the works and Microsoft is "committed" to at least six of them. Back in the 1980's, Atari created (and buried) ET, widely considered to be the worst video game in history. Howard Scott Warshaw is that game's creator, and our own Timothy Seppala spoke with him about the experience doing so. Well, it looks like aliens might not have built the pyramids after all. According to researchers at the University of Amsterdam, a sledge and some wet sand were the winning combination that allowed workers to pull stone for miles across the desert. This week, Hulu announced that it's bringing a selection of add-supported shows to mobile users for free streaming, regardless of whether or not they have a Plus account. Hulu's also bringing some new interactive ads that'll let you order pizza from inside the app, so you don't have to leave the latest episode of Brooklyn Nine-Nine. Popular login services have a security hole, but Facebook and Microsoft can't fix it

Wang Jing, a researcher from Singapore, claims to have discovered a potentially serious security hole involving OAuth and OpenID login services used by the likes of Facebook, Microsoft, Google and others. Jing alerted those companies of the issue, but it appears impossible for any of them to singlehandledly squash the bug.

In this article: apple, atari, et, microsoft, nokia x, pyramids, samsung, twr, xbox
All products recommended by Engadget are selected by our editorial team, independent of our parent company. Some of our stories include affiliate links. If you buy something through one of these links, we may earn an affiliate commission.