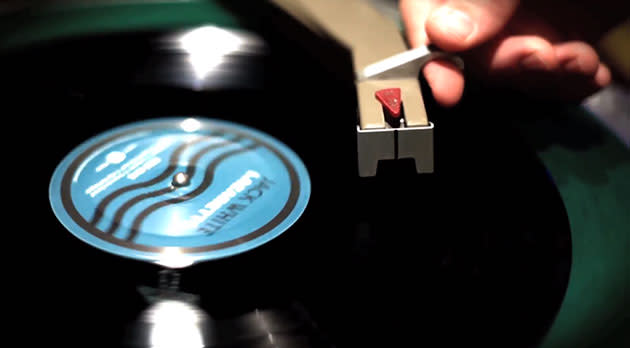 Setting a Guinness World Record after tracking and releasing a 7-inch vinyl in under four hours last month wasn't enough. Now, Jack White and Third Man Records have revealed plans for the Lazaretto Ultra LP ahead of its June 10th release. We'll provide the full list of details after the break, but here's a quick rundown of the highlights. First, there are two vinyl-only hidden tracks that are tucked underneath the labels on each side. What's more, one of those tracks plays at 78 RPM and the other at 45 RPM, making this 180-gram vinyl release a three-speed record. If you're familiar with White's project The Dead Weather, you know he's embraced the under label groove before.

Side A also plays from the inside out and both sides have a locked groove that repeats -- both of which have been seen on LPs before (The Beatles' Sgt. Pepper's, for example). Dual-groove tech plays either an electric or acoustic intro for the song "Just One Drink" based on where the needle is dropped, but both meet up once the song gets going. In the dead wax area on one side, there's a "first of its kind" hand-etched floating hologram of an angel. And finally, as you might expect, there's no compression of the audio here. If you're in need of further explanation, there's a video walk-through just down below.

In this article: hiddentracks, jackwhite, lazaretto, lp, music, record, thirdmanrecords, vinyl
All products recommended by Engadget are selected by our editorial team, independent of our parent company. Some of our stories include affiliate links. If you buy something through one of these links, we may earn an affiliate commission.