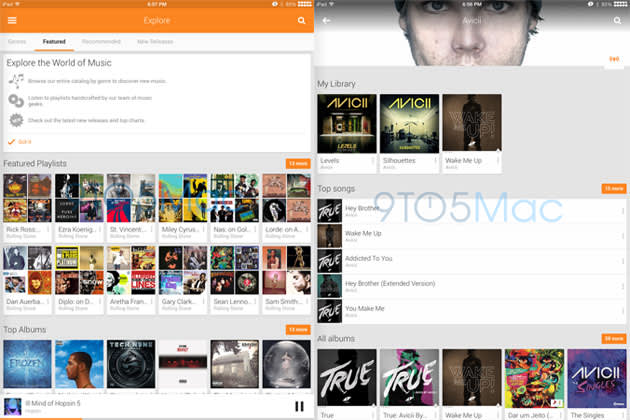 If you're a Google Play Music fan and have been limping along with the iPhone version on your iPad, you may already have the big-screen version without knowing it. That's because the iPad bits are already baked in to the iPhone app, according to 9to5 Mac. In fact, you can even activate it now just by changing a setting called "UIDeviceFamily" from 1 to 2, though your iPad will need to be jailbroken (which is currently impossible on iOS 7.1.x). Google Play Music has been a success since it launched on the iPhone in November -- likely helped by a month of free music -- so a pending app redesigned for the iPad's larger screen wouldn't be a surprise. In fact, when contacted by 9to5, a Google rep thought the app was already out, meaning it might just be awaiting the nod from Apple.

Source: 9to5 Mac
In this article: apple, google, GooglePlayMusic, iOS, iPad, jailbreak, leak
All products recommended by Engadget are selected by our editorial team, independent of our parent company. Some of our stories include affiliate links. If you buy something through one of these links, we may earn an affiliate commission.