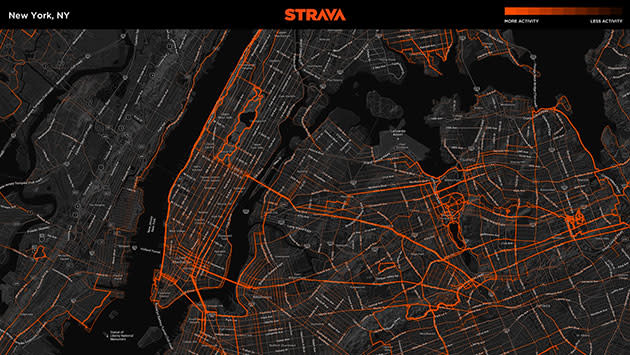 Strava has been using GPS coordinates to monitor progress for cyclists and runners for quite some time, and now it's looking to lend a hand to local governments. With its new effort, Strava Metro, the fitness-tracking outfit serves up data on 90 million bike routes and 24 million runs (at launch) to help planners examine how the two segments use public roads. Oregon's Department of Transportation has already signed on as the first customer, using the info for a year -- a deal that carried a $20,000 price tag. What's more, London, Glasgow, Orlando (Florida, US) and Alpine Shire (Victoria, Australia) have also opted in. "Right now, there's no data. We don't know where people ride bikes," Portland State University professor Jennifer Dill told the Wall Street Journal. "Just knowing where the cyclists are is a start." Urban planners in cities have long had access to metrics around automobile traffic, but tracking patterns for bike and runners hasn't been available up to this point.

In this article: bike, cycling, cyclists, data, fitness, gps, software, strava, wearable
All products recommended by Engadget are selected by our editorial team, independent of our parent company. Some of our stories include affiliate links. If you buy something through one of these links, we may earn an affiliate commission.